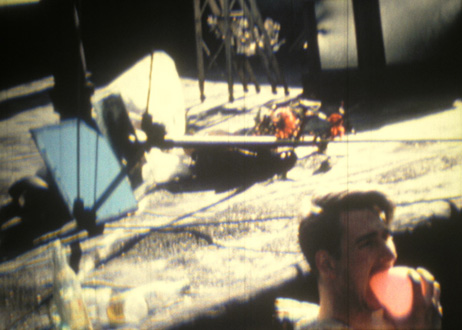 While so many filmmakers distrust or even completely ignore the internet as a distribution or screening medium (see earlier posts), the great Ken Jacobs chooses to celebrate and explore its potential. A few months ago he told us he was actually happy to see his (masterwork!) Star Spangled to Death was available online (via Google video) and now the wonderful Tank.tv initiative just gave him the opportunity to take the online dessemination of his work in his own hands. Together with curator Mark Webber he selected a portfolio of 20 works covering 50 years of his artistic production, from 1957 to the present day. They are shown – in relatively good quality – on the Tank.tv website from 1st October to 30th November, for free. After that period, they will still be available in their archive section (check it out, there are quite a few interesting works and shows there).

For the duration of the online show, there’s also an opportunity for discussion with Jacobs in an extended Q+A session. In his first answers, he clears up a few of his motives:

Q: How do you feel about the internet as a method of distribution or viewing your work?

“I love the Internet and hope to eventually see all my work available on it in best resolution. Free to individuals or perhaps with a non-coercive request for small sums, but standard costs to institutions. Could be that those who wish to can put money in a fund reserved for paying my assistants, that would help. Flo and I enjoy a lower middle-class existence on my teaching-retirement money, perhaps to be wiped out by market machinations but we do not gamble and perhaps will be spared. We’d like to leave something helpful to daughter Nisi and son Azazel. My 78rpm record collection? Doubtful that it’s worth much. A lot of my films and videos of course and they may accrue value. Money does sometimes come to us – sometimes really needed – and we’re always happily surprised. So it’s nice if it happens but couldn’t be less a motive for continuing to make works.”

Q: Many filmmakers are now having their work shown in an art gallery context rather than in the cinema. What do you think about this shift in context and is it suitable for your work?

“Some works could work in galleries but, other than screen size, home-distribution is probably best. Wherever concentration is best is best (we don’t gather in theaters to read books together). No hi-fi beats a well-designed music hall but I like the isolation with the music, the communing alone with the composer or performer that ‘s possible at home. For true conviviality I suggest the sundown stroll, great for mating, that the whole town participates in as practiced in Sicily.”

Q: Besides image quality, do you see major differences between the internet and other media? And will you make works specifically for the internet?
“With Erik Nelson’s help at the computer, we’ve got some short pieces ready for the internet. Just screened two at Anthology, they looked good on the big screen and the audience dug them. Yes; size, volume counts, with music and with images. However, they also look good on Erik’s iPod (I don’t have one). My vague thought is to make them available for downloading at best resolution with a request that people send a dollar into a PayPal account for each one and not charge admission to others to see them. Something like that. If the downloader is short on money, forget it, that’s okay, enjoy the work. I’ve been told there’s writing on the web regarding The Gift Economy. I’m already sold! but it could be because we’re no longer in want. Want. I remember it well.”

Oh, by the way, on Saturday 29 November 2008, Ken is doing one of his ‘Nervous Magic Lantern’ performances (like the one he did in Brussels last year) on the immense IMAX screen of the BFI. A dream coming true! Be sure not to miss it!