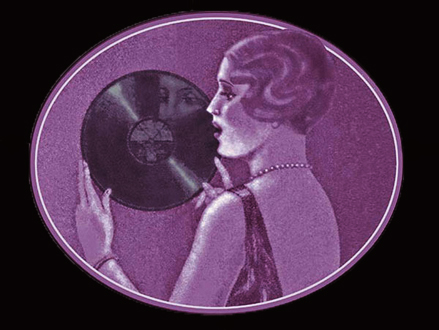 Yesterday I went to a lecture of Ian Nagoski, musician and music obsessive tout court, who mainly talked about his work as anthologist of early recordings. He recently compiled Black Mirror: Reflections in Global Music, a selection of recordings culled from 78 rpm records that he’s collected throughout his life, all from purchases he’s made from flea markets, thrift stores, or private collections (he claims he spent about 125 dollars for all the recording represented on the disc). They range from a Cameroonian ensemble experimenting with the clavioline in the early 1950’s to the theme song of a Indian thriller flick from 1949, a Lao monk prayer recital from 1928 to a song by a 10 year old Swedish boy playing the zither. In the liner notes he writes about his own experience locating, discovering (not only the records but also the contextual info, which is the most adventurous part of the search), and falling in love with the music. “Compilations of this kind that I really admire the most – three come to mind immediately,” Nagoski said. “Pete Whelan’s Really! The Country Blues on OJL, the Harry Smith Anthology of American Folk Music, and Pat Conte’s Secret Museum of Mankind. Those are documents of a particular man’s obsessions and private sound world and he’s sharing this piece of it with you. So that was the point – this is the sound world that I have occupied. I didn’t make these myself, but this is my life, this is a manifestation of this behavior that causes these problems in my life and creates all this joy in my life, too.” The compilation is published on the Dust to Digital label, who also released Art of Field Recording Volume I: 50 Years of Traditional American Music (other Volumes are comin’ up), consisting of 4 CDs and a 96 Page Book documented by artists/archivists Art and Margo Rosenbaum, as well as Victrola Favorites: Artifacts from Bygone Days, compiled by Rob Millis and Jeffery Taylor (of Climax Golden Twins) from their collections of rare 78rpm records and visual ephemera. Millis (who also produced a few excellent compilations of field recordings via Sublime Frequencies, “a collective of explorers dedicated to acquiring and exposing obscure sights and sounds from modern and traditional urban and rural frontiers ” headed by Hisham Mayet and Alan Bishop of the band Sun City Girls) and Taylor’s interest began when they sampled some 78s in their own music. “We often used other people’s records in sound collages, and 78s seemed like a weirder, scratchier kind of record to be using. After a while, we realised there’s a lot of great music from this era, and we started to look at the records not just as something to sample from, but as beautiful objects in themselves.” The duo started to collect old Victrolas, and scoured hundreds of second-hand shops and jumble sales for records. They found that a well-established collectors’ market had already pushed up prices for jazz and blues 78s, but that, at that stage, country, hillbilly and other music from around the world remained affordable (eBay has now radically transformed this market, and even some of Millis’ acquisitions from Asia now go for $1,500 a pop). That Victrola Favorites has been a labour of love is instantly apparent from the package accompanying the music, which includes a cloth-bound 144-page book filled with gorgeous images of 78s, phonographs and other musical ephemera from the early 20th century. In his accompanying essay, Millis explains how their aim was to see the music “revealed but not deciphered” – that is, not to bombard the consumer with historical information, but merely to access the music and make it presentable to contemporary tastes.

“Pictures of a gone world”, that’s how Pat Conte, who curates the Secret Museum Of Mankind series, describes these transcriptions of ethnic music from 78rpm discs. They are all part of an expanding landscape of anthologies and reissues, which are for the most part products of obsessive record collectors, distributed by small independent labels (not coincidentally, in many cases the record geeks and labels are affiliated with record shops. Nagoski owns one, for that matter) or just free on the Web. One wonderful example is Jon Ward’s Excavated Shellac blog (one of the many “sharity” blogs out there), focusing on ethnic music on 78’s. Ward uploads a new disc every Monday and, as Steve Roden recently commented, “it is always stuff you would never hear anywhere else, nothing here on CD. This is the rarest of the rare and the best of the best”.
All these examples illustrate that archival practices are moving away from – or at least paralleling – the “formal” procedures of memory institutions and instead tend to go into “informal” areas of archiving and dissemination, triggered by subjective interests, by fans, geeks and ethousiasts, who just want to share their own experiences with the rest of the world (I wrote about this in an article titled ‘de tijd van loslaten‘, translated “time for letting go”). There’s an article in this month’s the Wire in which Simon Reynolds comments on this evolution. Taking Mutant Sounds as an example, he writes: “the impetus used to be: I have something that no one else has. But with the advent of sharity blogging that’s shifted to: I’ve just got hold of something no one else’s got. So I’m immediately going to make it available to EVERYBODY.” But Reynolds also points out that there might be a downside to all this. “Perhaps the real danger represented by the sharity scene is actually to music fans. The whole-album blogs – like the web in general, with its vast array of net radio stations, DJ mixes, official giveaways, etc – drastically exacerbates the conditions known as collector-itis whose symptons were recently identified by Johan Klugelberg as “constipation, indegestion, flatulence”. Writing in Old Rare New, an anthology of elegiac paeans to the record shop, he described how the music fan succumbs to “Falstaffian gluttony… eating at the biggest buffet, heaping and piling exotic foodstuffs not only from all around the globe, but spanning history, on your plate” and coating the intestines of one’s hard drive with “noxious build-up””. Touché.

UPDATE (Oct 24): Jon Ward ruminates a bit on the subject
(…) “There is more at work, however, than Reynolds’ assumption that music bloggers use their medium to simply brag about their rare finds and then immediately make them available to the entire world. I’m sure it’s true in many cases (like Mutant Sounds, which is the subject of that paragraph), but I am absolutely resolute in the fact that I use this medium as an exorcism for my own peculiar obsessions. There is no good goddamn reason to be a music collector – they’re a dime a dozen these days. Because being a music collector means that you’ve transcended simply being a lover of music, and moved on to a person who accumulates and obsesses. I am under no allusions that providing music here is some kind of noble act. No way, Ray. But in order to continue to justify this obsession, I must actually do something with it that rewards me somehow – and obviously that is sharing something personal with a listener/viewer.” (…)

btw: also check out the compilations on Honest Jon’s Records, especially ‘Sprigs of Time: 78’s From The EMI Archive’, a compilation drawn from a two-year stint trawling through EMI’s archive of some 150,000 78s recorded in all corners of the world between 1903 and 1957.