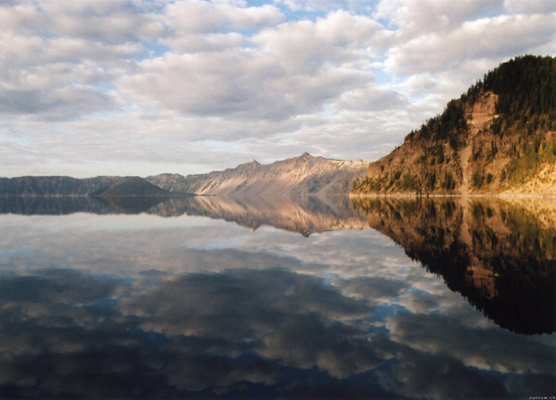 SCULPTING THE LAND
An evening on… Landscapes

“Alas! how little does the memory of these human inhabitants enhance the beauty of the landscape!”
— Henry David Thoreau 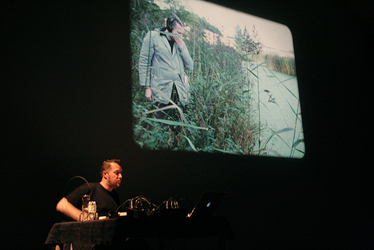 When La Monte Young wrote Composition “1960 #10” on a 3×5 filing card, he wrote what might be the most readily citational musical score in the history of Western music: “draw a straight line and follow it.” Filmmaker Luke Fowler and sound artist Lee Patterson interpret the instruction by this influential minimalist composer quite literally. Registering things they meet on their way, they make a ’straight’ journey through Ghent.

Luke Fowler (UK) is a key figure on the Glasgow scene where he works as an artist filmmaker and musician. He runs the SHADAZZ multimedia platform whose activities include, inter alia, the production of LPs in collaboration with other musicians and artists. Fowler challenges the classical conventions of documentary film in his film works. He subverts the structural syntax and collages found, apparently forgotten and own footage with photographs, diagrams and scripts to create a new kind of filmic mesh. Past and forgotten histories, radical and experimental ideas, ideologies and their protagonists are central to Fowler’s films.
Encompassing various forms, including improvised music, field recording, film soundtrack, sound installation and radio broadcast, Lee Patterson‘s (UK) work is characterised by the revelation of subliminal or barely audible sounds. Utilising commonplace materials and invented methodologies, his practice aims toward a new understanding of his surroundings through altering perceptions of everyday reality. His unorthodox and idiosyncratic approaches to generating sound have led to collaborations with a host of international artists and experimental musicians.

A special screening of Emily Richardson’s film Cobra Mist, which explores the relationship between the landscape of Orford Ness and the physical traces of its unusual military history. Accompanied by an expanded cinema event with live sound performances by Cobra Mist sound recordist and composer Chris Watson and Benedict Drew.

Having studied Fine Art at Middlesex University and Filmmaking at San Francisco Art Institute, Emily Richardson (UK) has gone on to make several films that have been widely exhibited both in the UK and internationally. Working with 16mm film and multiple screen video installations, her focus is landscape, spaces, environments and our relationship to them, whether it be a forest, a strip of coastline or a tower block. She uses the photographic nature and temporal qualities of film to create impossible experiences of architectural spaces and natural environments.
Benedict Drew (UK) works in performance, sound and video. He has worked with Otomo Yoshihide and Sachiko M and with various improvisers including Tom Chant, Angharad Davies, Lee Patterson, Steve Beresford, Seymour Wright, Rhodri Davies, Mark Wastell and Matt Davis. Benedict has also composed the soundtracks for five films by Emily Richardson.
Chris Watson (UK) is one of the world’s leading recorders of wildlife and natural phenomena, and here he edits his field recordings into a filmic narrative. The unearthly groaning of ice in an Icelandic glacier is a classic example of, in Watson’s words, putting a microphone where you can’t put your ears.

“We found our location – a view from an upstairs window in a water mill on the Isle of Wight. From this position a camera recorded one frame every minute (day and night) for two separate three week periods. Making this film was a major pre-occupation for both of us. For most of the second period (February ’72) we were without electricity and had to fire the camera by hand.” – W.R.

Landscape artist and pioneer of the moving-image installation in Britain, Chris Welsby‘s (UK) subtle meditations are exhibited in museums and galleries around the world. “Each of my films is a separate attempt to re-define the interface between ‘mind’ and ‘nature’. In my work, the mechanics of film and video interact with the landscape in such a way that elemental processes – such as changes in light, the rise and fall of tide or changes in wind direction – are given the space and time to participate in the process of representation”
William Raban (UK) is a leading figure in his field, whose work ranges from multi-screen gallery pieces to perfectly-crafted short films. Raban’s particular interests – the City of London and the British landscape – are in the tradition of the romantic landscape painters. 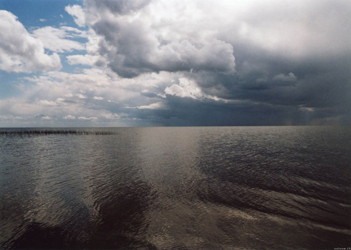 13 Lakes focuses on thirteen great American lakes and their geographical and historical relationship with the landscape. Each lake is presented by a single 10-minute shot, equally framing water and sky. The focus is not on coincidental geography – let alone social geography in any way – but rather on the play of light and reflections.

Since the beginning of the 1970s James Benning (US) has been considered a key figure in the American avant-garde. He elaborates on elements from structural film, but at the same time he is perceived as a protagonist of the ‘new narrative’ movement during the 1980s. His rigorous structures and tightly composed images betray his mathematical background, whereas the often autobiographical subjects reflect his working-class roots and outspoken political activism. His recent explorations of cinematographic duration and decelerated mapping of American landscapes create a spatial experience, resulting in works we don’t seem to be looking at, but are in. To him the landscape is a function of time. His films are enquiries into the relation of time with the perception and understanding of the notion of space; “attempts at seeing (and listening to) rural, urban and savage environments as ‘places’, presenting these places in aesthetical, socialeconomic and political terms”. 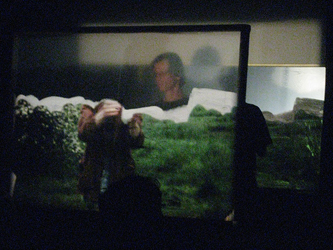 “Paper Landscape deals with the illusory space within the screen by referring to the material of the screen itself. It makes use of live performance played off against a film record of a past event.”

A key figure in British avant-garde cinema for already more than four decades, Guy Sherwin (UK) pushes the limits of cinema with his films, installation works and performances, in which he explores film’s fundamental properties : light and time. After studying painting at the Chelsea School of Art in the late 1960’s, Sherwin taught printing and processing at the London Film-Makers’ Co-op during the mid-70s, at the heyday of the British Structural Film Movement. He now teaches at Middlesex University and University of Wolverhampton, and collaborates on expanded cinema performances with his partner, Singaporean film and sound artist Lynn Loo. Concerned with seriality and live intervention, his work investigates questions such as the physical relationships between sound and image, the digital re-working of film, the mechanisms of projection, the methods of printing and the live interaction between performer and film.

(NOTE : During ‘Filmfeedback’, a screening/talk at Sphinx the next day at the Courtisane festival, Guy Sherwin will elaborate on his artistic choices and on this performance.)

This video work finds artist and singer/songwriter Will Oldham singing to the landscape in a lament devoted to intense Sublime experiences promised in the 18th century by writers such as Emmanuelle Kant and Edmund Burke but yet to be delivered. As in most of Walker’s work there is continual paralleling between an attempt to attain an understanding of (and the consequential unity with) nature and a forever quest for the ‘perfect’ relationship, (be this to ourselves, a lover or a friend), both of which are rarely achieved.

Richard T. Walker’s work is an evolving investigation into the natural landscape and its use as a contextual tool to mobilize thoughts and self-reflection. With strong nods towards the European and American Romantic periods, Walker uses spoken dialogue, music and performance to facilitate engagement and analysis that is both contemplative and active. The work questions how we perceive nature as well as how we imagine nature perceiving us. This creates a continual dialogue that challenges our personal and general perceived notions of Landscape and Nature encouraging us to ask questions about how we belong within the contemporary environment and subsequently within our selves and our society.