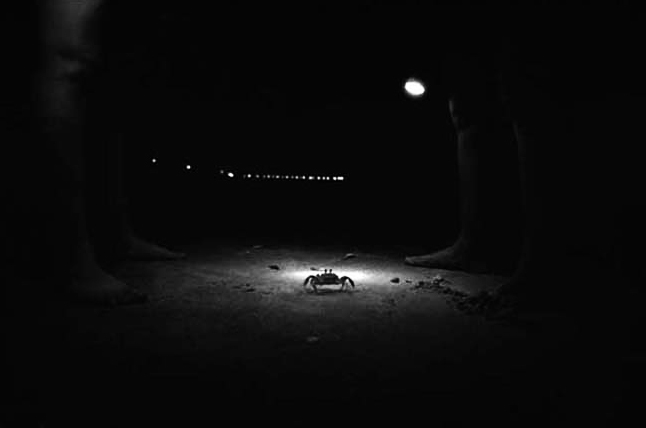 Another artist whose work we’d like to show in the context of the ‘Night Vision’ program is Anri Sala. A majority of his (earlier) video work is shot at night, like ‘Time After Time’ (2003), a ghostly vision of a horse standing alone in the dark, surrounded by busy traffic and restless dogs, or ‘Ghostgames’ (2002), set on a North Carolina beach in total darkness, in which two youngsters hunt so-called ghost crabs using flashlights to “capture” them. For the exhibition ‘When the Night Calls it a Day’ (Le Musée d’Art Moderne de la Ville de Paris, 2004), Sala’s idea was to plunge his work in permanent half-darkness, to play with the lighting in such a way as to create the particular luminosity of twilight that is sometimes refered to as “entre chien et loup” in French – the moment at sunset when night, and the indistinctness that comes with it, takes over and half-light reigns.

Some excerpts from his notes:
“Instead of building a dark projection room and allowing the video to dictate the atmosphere of day or night according to the projected image, I want to create two specific experiences. Because most of the videos that will be presented have been shot at night – I want to situate them in a place which is entre chien et loup, where the image projects the night, but the surrounding museum space remains in twilight. And so, the projected image will be darker than the space of projection itself. This wish to freeze and expand this moment of twilight very directly echoes the cinematographic experience of shooting outside at dusk when it’s almost impossible to control the ight and the temperature of the image because they’re constantly changing. The idea is to extend this moment of time that normally lasts fifteen minutes to the whole time of the exhibition, hour after hour, day after day.”

“What I also like about the expression entre chien et loup is the reading of a situation where you are no longer sure of what you see and you assume the possibility of being wrong and also of being taken for someone else. In English, it’s called ‘twilight’, but interestingly, in French, it is not directly related to the light but to its effect on our vision: one cannot tell the difference between a dog and a wolf.” 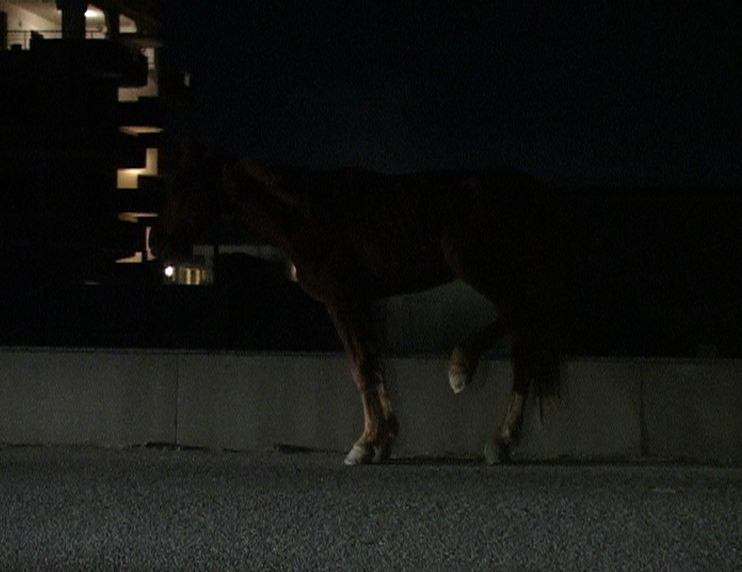 You can watch ‘Time After Time’ on the website of Lumen Eclipse.
Image on top: part of the ‘Light-Pushing’ photo series (image also appears in ‘Ghostgames’ )