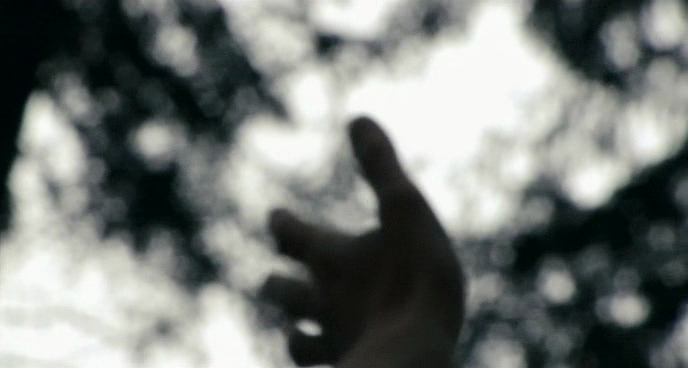 “A segment has been cut out of the back of his head. The sun, and the whole world with it, peep in. It makes him nervous, it distracts him from his work, and moreover it irritates him that just he should be the one debarred from the spectacle.”
Kafka, January 9th 1920.

The future of cinema is to be free and great and strong, to transmit some of that “windy chaos” that we tend to protect ourselves from, as if we desperately wanted to believe that the world is ordered, reasonable, possible, when it’s exactly the opposite: chaotic, delirious, untenable, driven by the unstoppable force of desire. Beyond will and morality, the world is what we desire, absolutely. Terribly. And cinema should be considered commensurate with this excessive horizon. Its projected desire impressed upon the film strip. That is what filming is, to make possible the movement from the self to the others and from the others to oneself. That is what light is, precisely that, the movement of the desire reflected from the face that stands quietly in front of me, and it looks at me, and I feel invigorated by its breathtaking beauty, its unchangeable otherness. That is cinema, to film that presence, the being-there of things, to film trees and mountains and the sky and the mighty flow of the river. That is what it is to be an actor, to be able to carry the weight of reality, its gushing, hallucinating vibration, to embody it (very few succeed), and in the time of a shot, the space of a take, to become sky, mountain, river and the stormy mass of the ocean. And then cinema is immense. We are won over and forget ourselves and we forget what we carry, and what we don’t know, what we can’t know, although it fascinates us and brings us to life, to a life that is lived, and so it unfolds. This rhythm, this way of framing, of lighting the body, of interrupting the take, it comes, it’s there, and cinema closely touches its essence, a sensorial experience of the world, whose destiny is to transmit through sensations, the only means which are its own, to convey a fraction of the passing world, the sensitive world, soon dissipated, lost, carried away by time, a part of time, and that feeling of “inevitable solidarity” may resound in each one of us. It is a far cry from the narrative labour to which most filmmakers submit to, without resistance. Far from psychology, from categories that have been abused by morals. No, the future of cinema is its childhood, its brilliance, its brutality, the world that begins again, it’s an image that is larger than life, in front of which we placed ourselves one day, this vibrating, silent image, for the “infans” is the one who doesn’t speak, who stands aside from social conventions, in front of the chaos, outside of language, of sense, without distance, suddenly captured by colour, and it’s the big red flowers and the field and the woods, and it’s the river and the water that is too cold and their hands rubbing their back, warming their small bodies, and it’s the breath against one’s neck and the wet soil under one’s feet. That’s infancy, to be entirely swept away by sensation, overwhelmed by one’s emotions, subjected to the almightiness of one’s affections. And that is cinema, its future, that time silenced of images, that heroic time, poetic, that time of childhood, where we can all be transported to by the sole force of desire through the body and its stories. And eyes wide open in the dark, and it scares us so much, so much, but also we laugh we cry, and it has held us, breathless, in front of this big face with sealed eyes and with the heart knocking against our chest, we have run along the way, and we have cried out from the dunes : “Johannes…”, and we have waited, and hoped, so much, and against the wind, and against the great cloudy sky, shouted again, with him, with the father, “Johannes…Johannes…” and for a moment we have become, without knowing how, that father looking for his child, his lost son, and then that trampled grass and then the entire moor. That is cinema. Its destiny, its future, is to stand, unfailingly, before the world, to its eternal return, facing the high noon, to the sacred “yes” of the child.

In the beginning, movement analysis. Chronophotography. Horse, birds, man, woman. It runs, it jumps, it flies and it starts again.

And immediately, the pornographic use, for cinema is the industry of the bodies. Our great-grandmothers suck and are humped in the kitchen. The smell of soup and fuck, that is the smell of the century of the locomotive and the unconscious. Men are muscular and have moustaches, they pose for our great painters, they pose with a hard-on for the camera. An assembly of bodies, mise en scène, a litany of sequences, the script of cinema was de Sadean from the beginning. In the meanwhile, Degas brushed bodies, women in the bath, with their backs curved, with their fleshy bottoms in the dark shadow of the greasy ink, available bodies, the flabby bodies of whores, legs wide open, pot-bellied, the exhausted bodies of the brothels, of the dark rooms. Degas worked on the black-coated zinc plates with his hands. With his fingertips, with his palm, he stamps, tears, scratches, removes the dark night. He brings in the light.

His eyes suffer, he touches the image. He photographs absolutely. Tiny, astonished dancers fluttering in the footlights, with long brushed hair, an opaque mass flowing along their backs, crouching women with painted faces, legs in the air, gaping sex, sprawled bodies, rigid bottoms, inscribed by Degas in the thick glue, in the mischief of the ink, the truth of his time. He’s in the room, in the dark. He’s fabricating, blindly and slowly, cinema. And he invents it just as de Sade did before him. He shows us the way: cinema is made (above all) with the hands, with the skin, with the entire body, by fatigue, by breath, by the pulsations of the blood, the rhythm of the heart, by the muscles. Body and sensation, that is the machine, its absolute power, its obsession. That is its becoming. Invented bodies, comical, grotesque, obscene, the improbable bodies of the stars and the monsters, and light, its palpitation, and the beating of shots, and in us, fear, joy, hope, sadness, the obscure deployment of human passions.

What do we seek, since the first traces of hands were impressed in rock, the long, hallucinated perambulation of men across time, what do we try to reach so feverishly, with such obstinacy and suffering, through representation, through images, if not to open the body’s night, its opaque mass, the flesh with which we think – and present it to the light, to our faces, the enigma of our lives. Bodies and thoughts, bodies and sensations, those are the same profound arrangements of cinema. In 1927 Antonin Artaud writes Witchcraft and the Cinema, a seminal and visionary text. “To use cinema to tell stories, exterior actions, is to deny its best resources, to go against its absolute object. I think the cinema is made primarily to express matters of the mind, the inner consciousness, not by a succession of images so much as by something more imponderable which restores them to us with their direct matter, with no interpositions or representations”.

Artaud is delirious. Surely, but not only. What is this imponderable thing? What would the nature of cinema be if it rendered images directly, without interruptions, without representations? Artaud the magician called for the transmutation of cinema, it must be of another substance in order to express the matters of thought, the interior conscience. Such is the insane horizon of cinema, improbable, the secret that haunts it. Such is the energy that animates it, that pushes it forward. One must close the gap between oneself, one’s body, and the source of sensation. Cinema desires a wrapped body, taken by the instinctive material. All projection devices (large screen, 360°, glasses, stereo, Dolby surround, headphones…) increasingly place us inside the cave, at the centre of illusion, in what is already our reality, a cyberspace. Without a doubt, our body will soon be directly connected to the film. A hybrid device of technology and flesh – science-fiction imagines it and science produces it. A cinema in the “folds”, inscribed within the body, in direct contact with the organs, a nanocinema, molecular, contagious, indispensable, will be the next step. But what Artaud foresees is even more insane, more unheard of. Cinema is no longer only “a psychic cinema… a subcutaneous injection of morphine… The cinema is an amazing stimulant (which) acts directly on the grey matter of the brain”, it demands henceforth another body.

In 1947, precisely, the world gets back on its feet, stunned. Artaud launches his programme: the body must now “by placing it again, for the last time, on the autopsy table, remake his anatomy”. Sperm, Americans, synthetic products. His paranoia is fully operational. Vision, inspiration. That is his pace. That’s what he’s made of. He throws out sentences. He whispers, screams, smashes. Under the pressure of his breath, Artaud dictates the order of things, he draws the bodies of tomorrow, he announces the reign of “synthetic products ad nauseam”. The time has come for the actual fabrication of bodies. The voice is hoarse, acute, in overdrive, accelerated. It announces our future. Man will finally accomplish the endeavours demanded by de Sade. He will confront his definitive materiality, absolutely, without deviation. Fabricated, machined, modifiable, transformed into a commodity, he will be a “living currency” (Pierre Klossowski). The exact opposite of virtuality. Bodies will be the simulacrum through which we will experience and experiment the power of our desire, its “voluptuous emotion”. Will fiction be embodied, carnal, made of blood and muscles? Is this the “imponderable thing” which Artaud dreams of, through which we will access our interior conscience without interruptions, without representation, is this the transubstantiation of images in a body? Of course this is an hallucination, but beyond the improbability of such a development, Artaud’s delirium and Klossowski’s fable seem to sketch the destiny of cinema, of this cinema that I love, the one that connects us to the most archaic forces, to what’s more inherent and instinctive in each one of us, inextricably weaving image and body, the very stuff of our affective relationship to the world, by placing us under the threatof the astonishing emergence of what can neither be seen nor heard.