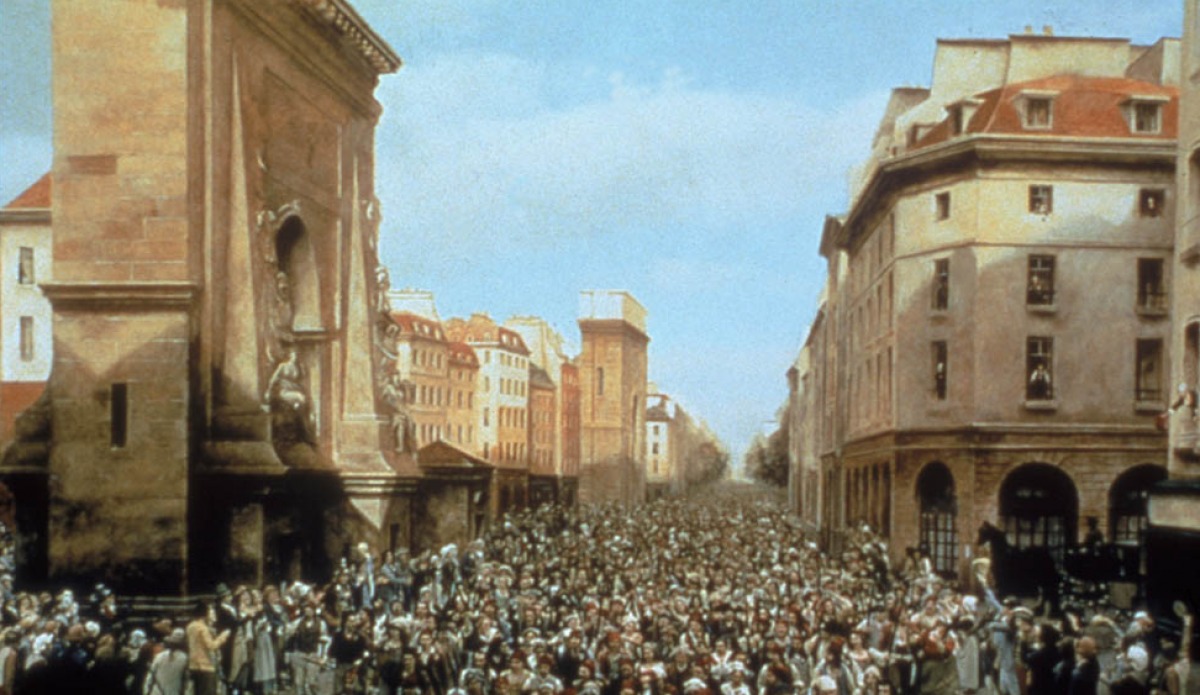 Among the feature films of the Venice Film Festival is L’Anglaisse et le Duc, a period piece by Eric Rohmer, inspired by the memoir of an aristocratic Englishwoman living under the French revolution. Rumours have it that the Italian festival is thus paying tribute to a film that the French selectors of the Festival of Cannes allegedly rejected for reasons of political correctness. A scent of scandal and of repression never does any harm to a film but this time it calls for reflection. For what reason would it be compromising today to film Revolution in general and the French Revolution in particular from the viewpoint of aristocrats? For decades, French children have devoured – without any damage having been done to Republican and revolutionary values – the stories of the Mouron Rouge, a heroic English aristocrat who saves gentle nobles from the clutches of the ferocious popular brutes. And since the 1980s the theses of Francois Furet, largely inspired by the counter-revolutionary tradition, have dominated revolutionary historiography and intellectual opinion in France. One does not therefore see what considerations of political correctness would prevent the showing of bloodthirsty revolutionaries today. And one suspects that those who make Rohmer to be the artistic flag-bearers of a France that is finally confronting its revolutionary phantoms by simply using the classic trick of presenting the dominant vision of things as a minority viewpoint, a victim of persecution in a horrible ‘plot by intellectuals’.

But if there is a politics in this film, perhaps it plays out elsewhere than in these flag fights. Rohmer has never tried to pass himself off as a man of the left. And he maintains that he did not want to make a militant film. Indeed, the story of Grace Elliot’s adventures in the revolutionary torment is little concerned to judge the causes and effects of the Revolution. By way of doctrine, it presents only two commonplaces of political and historical fiction. The first contrasts moral and affective fidelity to the tortuous calculations of politics. In this way, the English Lady embodies the feminine and unthinking virtue of fidelity yo the persecuted Royal family, in the face of the masculine vice of calculating self-interest, represented by the Duke of Orleans, one of the King’s cousins and a man who is prepared to make any compromise to serve his own dynastic interests, including voting for the death of his cousin. The second commonplace opposes the good manners of evolved people to the eternal uncouthness of the bestial populace. Some used to counterpose the correctness of German officers to the sadism of the SS brutes. Similarly, Grace Elliot is continuously wrenched from the hands of the concupiscent and inebriated hordes by officers or commissaries, indeed by representatives of the people of Robespierre, to remind the populace of the sense of the laws and of the civility of worldly decency. So, if there is a political message in the film, it does not concern the legitimacy or the illegitimacy of revolutions. It boils down to the rather widespread, twofold idea that politics is a dirty thing and that this dirty thing must remain the preserve of those who have proper clothing and civil manners, that it must be placed out of reach of the street population. 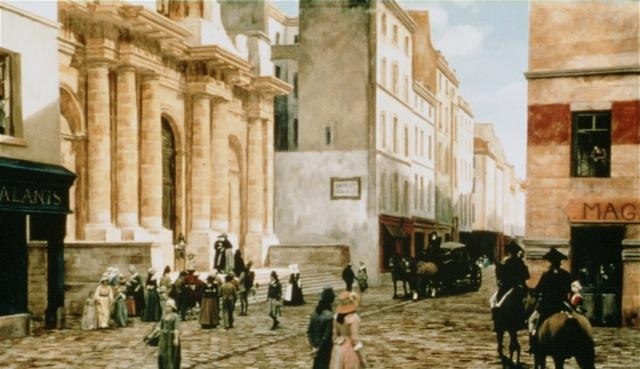 Of course, Rohmer is not an ideologue. He is a filmmaker. But this is exactly where things become interesting. In his film, the relation between the proper and the dirty, between respectable people and the street crowd, is turned into a problem of occupying the image. This problem is raised and solved in aesthetic and technical terms which have an emblematic value. The film in fact has a pictorial backdrop, drawn from aquarelles representing the Paris at the end of the eighteenth century, with its aristocratic ‘sweetness of living’, which had just been drastically altered by the Revolution. All the exterior scenes and in particular the crowd scenes were filmed in the studio against a neutral background and were then inset into this painted canvas setting. This procedure is not merely an economic alternative to the costly reconstitution of decors from the epoch. It is also a manner of staging the people and of putting it back in its place. This setting, which is made for the passage of carriages, is best suited for the two or three picturesque characters that conventionally establish the scale of the monuments and inject some life into it. Only, at this point, the canvass in some sense opens up and instead of these genteel players there emerges a compact crowd, which, visibly, has no place being there. The visual arrangement of the mise-en-scene thus presents the allegory of the ‘bad’ politics: that where the streets normally designed for traffic between public edifices and private residences become the theatre in which the crowd of anonymous bit players improperly proclaims itself the political people.

But this arrangement corrects the excess that it manifests. These crowds of common men of sinister appearance, who invade the palaces of kings and the hotel of nobles, are assembled in the studio by the filmmaker between ropes fixed to prevent their digitalized images from entering inopportunely into the painted décor. Thus, the painted image, the studio and the digital camera combine their powers to resolve aesthetically a political problem, or rather the very problem of politics itself: the fact that these street people, though visibly not destined to do so, concern themselves with common affairs. 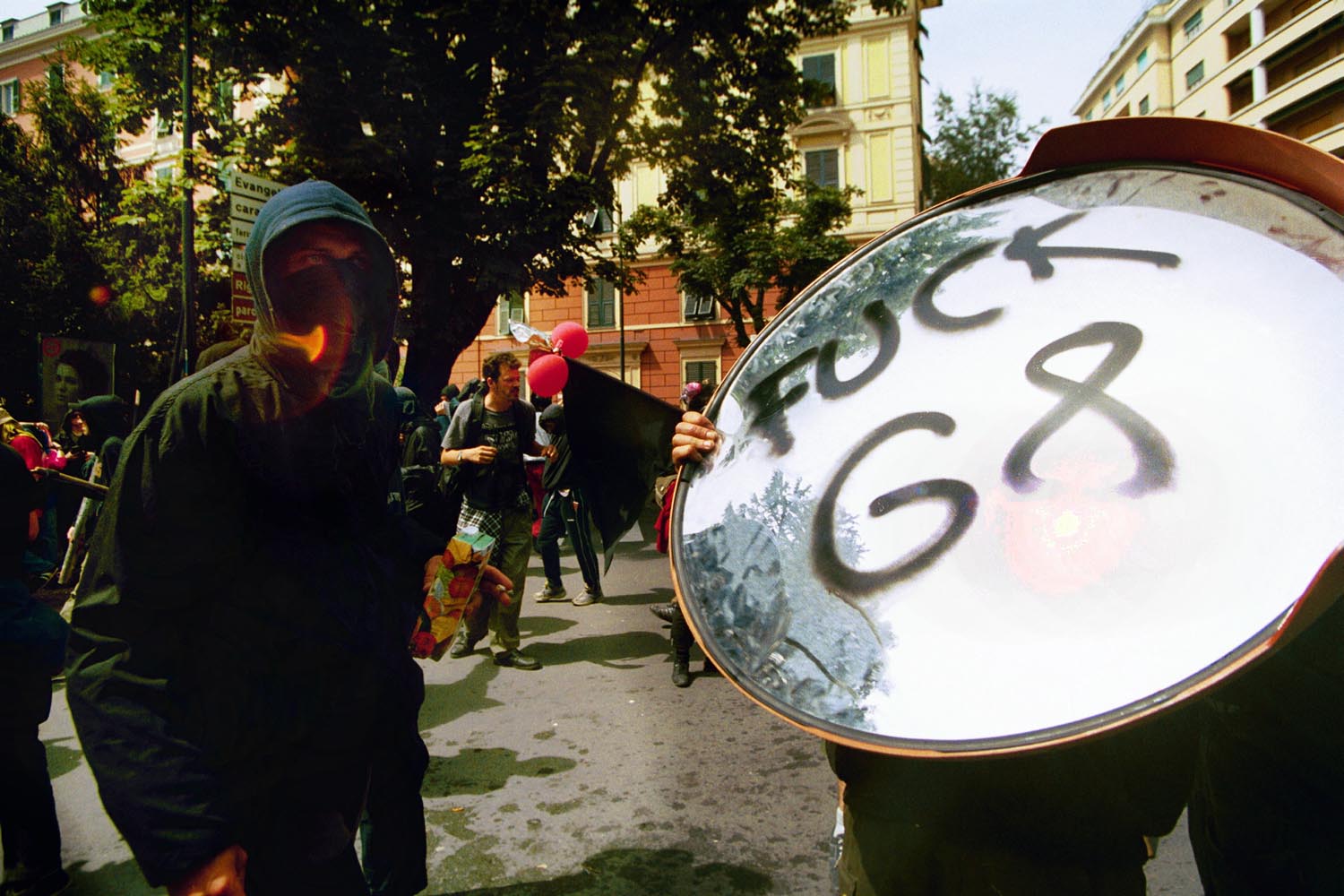 Things are evidently less easy for those we call politicians. And perhaps the Venice film jury, in beholding Rohmer’s framed and digitalized crowds, bore a compassionate thought for the statesmen of the G8 who had gathered at Genoa only 2 months beforehand. For the latter, who would like to govern the world in only having to deal with responsible ‘interlocutors’ – be they dictators of former KGBers like Putin – still have no ways of performing any studio channeling or digital dissolving on the crowds of demonstrators who persist in thinking that they are also part of the world and have a vocation to concern themselves with its affairs. Nor does showing demonstrators in hoods – the modern equivalent of the bestial face of rioters of yesteryear – suffice to put the people in its place. So it is necessary to entrust the police with the ‘aesthetic’ task of cleaning up the streets, in transforming historical towns into bunkers, in charging down demonstrators and in invading their Headquarters, and in much less civil manner than the Parisian Sectionaries in Rohmer’s film invade the dwelling of the Beautiful Englishwoman. According to the well-known joke, being unable to build cities in the country, the greats of this world have therefore decided to gather next time in the Canadian mountains, so that, far from the noises of the unwelcome crowd, they can realize their own dream, the current dream of governments: the direction between responsible men of a world without people. 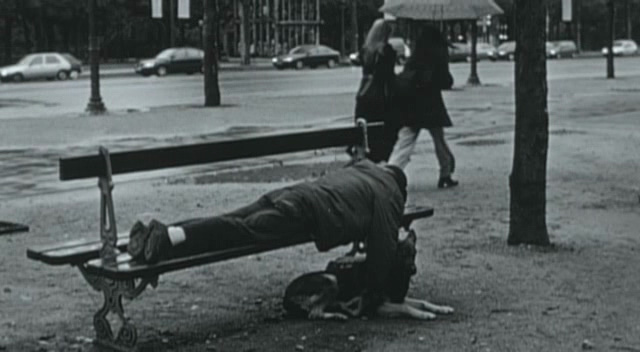 So, if Rohmer’s film provokes embarrassment, it is not because it clashes with the spirit of the times. On the contrary, it is because it is too comformist to this world, because, beneath its visually and ideologically retro appearance, it images in too direct a manner the contemporary dream of the world government of ‘competent’ people, delivered of all disturbances from the street. Once again, Rohmer is little concerned to play the flag-bearer for the final burial of revolutions. His politics is first and foremost aesthetic. His own ‘counter-revolution’ is circumscribed within the field of cinema. Though he never played at being a leftist, in the 1950’s he was one of the first champions of the Rosselinian revolution whose principles ended up paving the way for the ‘New Waves’: bid farewell to the studios and go into the streets with the cameras on the search for contemporary inhabitants of the world, chasing all the unforeseen events that make up their material, sentimental and possibly political itineraries. Following the mobile camera of New Wave filmmakers, students of the 1960s set out to discover the social world of their time and invaded the streets of Paris and a few other metropolises. Again, this link between an aesthetic of the cinema and a way of practicing politics is also evoked by Godard’s last film, Eloge de l’amour, in which the camera travels through the streets of Paris, visits the night cleaners of trains as though it were a leftist handing out pamphlets, and places itself meditatively before the building, today deserted, of the erstwhile ‘worker fortress’ at the Renault factories. As for Rohmer, he turned away from the hazards of the streets very early on to dedicate himself to the ups and downs of sentiment in socially protected microcosms, but all the same without renouncing Rosselinian realism. The avowed artificialism which corresponds, in L’Anglaise et le duc, to a historic broadening of the set, today works as an aesthetic manifesto symbolically closing an age of cinema. It is in this, more than in any ideological measure, that he is in agreement with the desire to close, finally, an age which wanted to return to the streets and render politics to all.