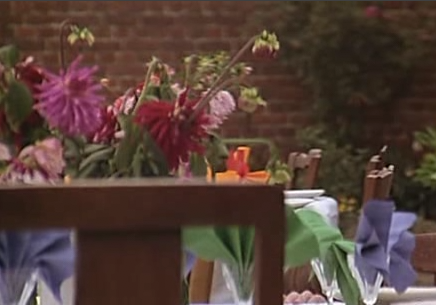 Originally published as ‘Fleurs intempestives (la communion solennelle)‘, Cahiers du Cinéma, no. 278 (July 1977), as part of the series ‘Sur la fiction de gauche’ (“on the fiction of the left”).

Why have these vases of dahlias on the banquet tables in La Communion solennelle (Réné Féret) caught my eye from the very first shot? Why have I recognized in them the return of an old exasperation, the same one that struck me, at the time of Joli Mai, while watching Chris Marker, forerunner of today’s leftist voyeurism, walking his camera in the courtyards of the popular neighborhoods and kindly congratulating a brave housewife on her plants: “What about thoughts”, he said more or less, “are they hard to cultivate?”. Beneath my derision in calling to mind ample plants of thoughts growing all by themselves on the stones of my doorstep, there was something else: the feeling that their relation to flowers could reveal something about the enterprise of the friends/voyeurs of the people.

We need to look into the history of leftism to make out what this “something” means: a certain anxiety behind the visit to the people, offers of love addressed to them, requests to be instructed by them: something that we at the same time wanted and didn’t want to know about them: a family affair that was a bit different than those we were constantly pestered with and that Chris Marker’s Q&A allowed us to discern: no longer the question of children: where do children come from? but the question of intellectuals who know all about what is to know about the naivety of children: where do cabbages come from?

Love for the people, question of cabbages, place of a fundamental quid pro quo of which the formula was given to me during a meeting of intellectuals of the Gauche prolétarienne*, at the height of the great love for the brave folks and household sowers of our French people’s thoughts. The meeting, as often, took place in an apartment a bit too luxurious in a neighborhood a bit too beautiful and, as was custom, the participants made clear by their observations that this context wasn’t theirs. In this way one of them turned to a vase of blue anemones: “How fake!” He sighed, “blue poppies!”. This anecdote might help to define the intellectual friend of the people: the one who takes real anemones for fake poppies and thinks that refuting florists will lead to the flowers growing in the people’s wheat fields. So it didn’t surprise me to find, a few years later, the same intellectual developing this quid pro quo into a philosophy of the people, weaved together like a rhetorical flower arrangement of fake-real poppies obtained by refuting the fake-fake poppies.

Just as I wasn’t surprised that the disappointments experienced on the terrain of the love for the people and the question of cabbages have brought about this fold towards the family novel, that takes on two figures: gauchiste psychoanalysm questioning the Father’s love according to the principle of serving the people; ethnologism of the left eager to transform, by way of village chronicles and people’s recollections, the voyeurist relation to the people in a relation of heritage and – throwing back the question “where do children come from” not to the law but to the peasant’s essence disrupting it – to find, while identifying precisely with the children whose origin has been told to us, the occasion of finding at the same time the table served with cooked cabbage.

There we have indeed the answer to a question that I asked last year in Cahiers: how to unite the perspectives on a fiction of the type “do we come from there?” Don’t the particularities of our national history oblige us to substitute its representation with a family picture? The filmmakers of the “Programme Commun”* who need this unifying image have provided us with a solution in proposing a fiction of origin that can always be folded back on the family picture: familiarization of the heroic history (L’Affiche Rouge*) or historization of the family picture (La Communion solennelle), in which the accordion of memory opens up from a place of communion where the past folds back on the present and the characters fold back on the actors, where the chronicle of heroes identifies with that of anti-heroes: place of recollection and recognition where the tables are served for the festivities. 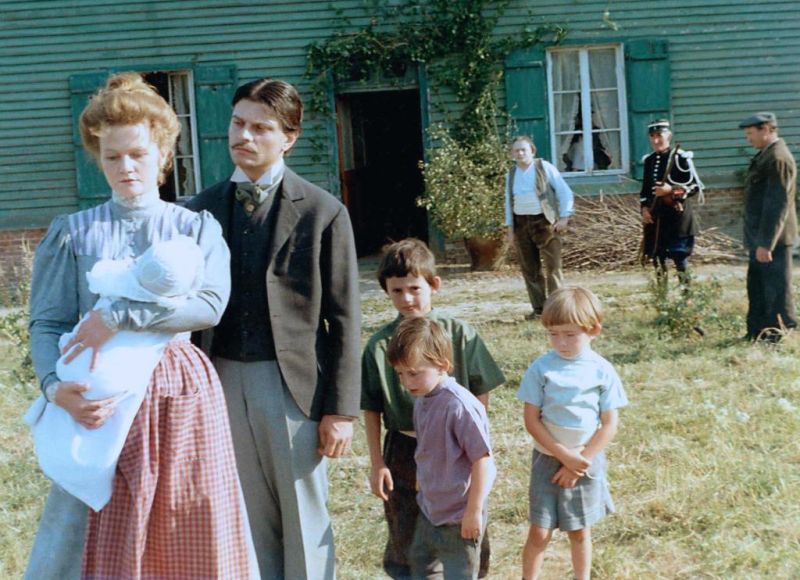 The family story/picture makes it possible for the “memory of the people” to avert the cuts dividing the conscience of the left. Still the trap that is set up for us has to be disrupted. Féret tells us these are only his family pictures. Just browse through them and compose your own. So what actually functions in La Communion solennelle is a certain family-form and a certain photo-form, but not at all the family photo. What we are shown is precisely always what is behind the family photo: the real of adultery behind the cliché of marriage, passing notes hidden from the husband, nocturnal visits to the fiancé hidden from the father, desires passed on from the wife to her sister or her cousin: games in which some are not allowed to see or hear and others respond to gazes signifying desire. What organizes the space of the visible in La Communion solennelle is not the arrangement of bodies turned towards the family operator, it is the voyeurist dispositif – pushed towards its vaudevillian limits – of the preparation for sexual spectacle. In fact the reference to the family photo simply has the function of denial. Because a certain politics takes place precisely in this look attached to the back of the photo, but a politics which only draws it strength from its denial: (it is only a family photo)

This false family photo is in fact a certain idea of family which is also a certain idea of France: that of the young left laying claim to the heritage of the profound France. In the representation of the continuity of family which is at the same time an irrepressible deviance of bodies, in this naturalism of vivid sexual force which makes up the fabric of the family novel, a certain history makes itself known: that which renders visible in the contemporary bourgeois and petit-bourgeois France the blood and essence of farmers slowly performing their daily tasks, greedy salesmen working and earning, archetypical family of miners and workers, rooted in the natural family. New ideology of the left which, rather than reclaiming the old fashioned principles and flags, wants to prevail in its naturality, renewing its blood with the earthly essence of cabbage planters and child sowers. This is what is proposed by the new spectacle of the left: an image of the human thickness of the people/nation/family of which we have to feel heirs. The present of the Communion is that in which, by way of actualization of historical bodies, we absorb the flesh and the blood of people: Eucharist of people clearly signified in the film by the raising of the champagne glass by the communiant who repeats the raising of the beer glass devoted to the first descent of galibots* in the mine. Work initiation, sexual initiation, political initiation. We absorb the people’s substance of the child who descends for us, if not in hell, at least in the mines. Communion: celebration of springtime, sacrament of youth which is at the same time a celebration of harvest and plucking time.

That’s where we find the dahlias again. Flowers well in their place, we could say, prolific and opulent flowers, as well in their place in the florists windows as in the farmers courtyards and workers gardens. To tell the truth, Féret hardly seems concerned. The screenplay only mentions flowers in the paragraph planting the ideological setting: communion, springtime, child, flowers, lovely time of May (joli Mai), lovely family photo: try it yourself, as you are invited to do, and the difficulties will start: because of the dahlias, because the dahlia is not a flower of springtime but a flower of summertime. More precisely, it is planted around the time of communions and they start to flourish around the time of harvest. In fact, you only have to take a look at the other side of the road to the golden trimmed fields. The harvest has already been done. Obviously because the bread that is on the communion’s table had to be baked.

What does all of this mean for the miserable dahlias? Communions take place in May and the film was shot in August? Films are made when possible and given the expense of shooting it’s all the better to do it during the summer months. And then again, art transfigures reality and does what it wants in its own right. Don’t you know we play Wagner in blue overalls now?

Of course! Of course! If one can film in August, there’s not point in waiting for the next month of May. Only the question has to be asked the other way around: why does the family gathering which is the occasion of this family novel have to be a communion? Why not a marriage? Why a child’s festivity which is a celebration of initiation and growth? Why a sacrament that can only take place in the lovely month of May?

If we can play Wagner in overalls why couldn’t we make the dahlias blossom in May? But is there no confusion of genres here? Doesn’t the leftist culture demonstrate itself today under the guise of two great complementary figures? There is the great culture we put “in all its states” and then there is the family photo, image of the forgotten of the great culture, the works and the days, the seasons and the festivities of people that we relish faithfully. In today’s voyeurist/ethnologist frenzy, how can we not feel in the long run a certain perplexity in seeing the light at the end of summer lightening up the springtime festivities of the people?

Who then, we? Maybe the gardeners would find something wrong in the family photo. But the leftist culture is not made for gardeners. It is intellectuals showing each other this family photo which is the family photo of the people. More precisely the affair plays out between those who think of themselves as the heirs of the last great springtime celebration and those who are preparing the next electoral harvest, between those “children of May” exhausting themselves, in the struggle against the Easter anemones, in search for the poppies of June and those who want to grow the dahlias of the harvest in May. This out-of-season ethnology is perhaps the way to bring together their perspectives, to unify the class of those who know so much about children and so little about cabbages, about an image that at the same time displays and denies the ideology of the new son of the people: our forefathers have sowed and planted; it’s up to us, their flesh and blood, to harvest the ripe wheat.

translator’s notes
* La Gauche prolétarienne (GP): a maoist organisation that reclaimed the heritage of the UJC (Union des jeunesses communistes marxistes-léninistes) in the aftermath of May 1968.
* Programme commun refers to a reform program that was signed on 27 juin 1972 by the leftist Parties in France.
* L’Affiche Rouge (Frank Cassenti, 1976). See also Rancière’s ‘Le compromis culturel historique’, in Les révoltes logiques, 1978, translated as “The Cultural Historic Compromise” in The Intellectual and His People: Staging the People Volume 2 (Verso, 2011).
* galibots: name given to the child miners in the 19th century.