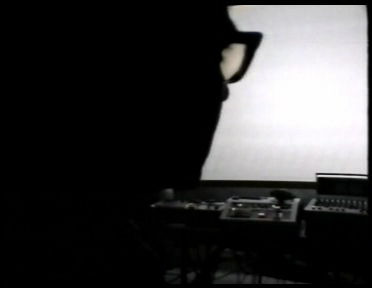 Winter 1985. Having published a large collection of his writings for Cahiers du Cinéma, Jean-Luc Godard agreed to a promotional “one-man show” taking the form of a cinema masterclass for members of the Cinémathèque française, who, it goes without saying, were already won over. Among a number of overly reverential questions, which he had no difficulty answering, two young men asked two rather disjointed questions: why did Godard not make adventure blockbusters that everybody wanted to see, and for that matter, why did he no longer communicate his great love of cinema in his films? Godard was naturally able to answer the first question (he had already answered it in his video Scénario du film Passion, 1982), but he was somewhat taken aback by the second one and paused. When it comes to a love of the cinema, cinephilia, fond citations from old movies, he believed (as did everybody else) that he’s “been there, done that.” To such an extent that his name is now emblematic of a passion which even his detractors have to concede, namely a passion for the cinema. The name “Godard” (after Welles, Fellini, Kubrick or more recently Wenders) designates an auteur but it is also synonymous with a tenacious passion for this region of the world of images that we call cinema.

A love of the cinema desires only cinema, whereas passion is excessive: it wants cinema, but it also wants cinema to become something else, it even longs for the horizon where cinema risks being absorbed by dint of metamorphosis, it opens up its focus onto the unknown. In the early years of cinema, filmmakers believed that the art that they were inventing would be a resounding success, that it would play an incredible social role, that it would save the other arts and would contribute towards civilizing the human race, etc. For Gance and for Eisenstein, nothing had been decided. For Stroheim or the young Buñuel, on the face of it, nothing was impossible. The evolution of cinema had not yet been indexed to the evolution of the Hollywood studio talkies, the war effort, the introduction of quality criteria (which, with hindsight, make studio productions look like the hand-crafted harbingers of industrial TV movies). As soon as that happened, the future of cinema was no longer anybody’s passion (even on a theoretical level). It was only after the war, after the early warning signs of an economic recession, followed by the New Wave kamikaze patch-up job, that the idea of another cinema, one that would open on to something else, was possible again.

Possible, yes, but no longer with the conquering optimism of the early years (“you’ve seen nothing yet, cinema will be the art of the century”). Instead, it is accompanied by a lucidity tinged with nostalgia (“we’ve seen many films, cinema has indeed proved itself to be the art of the century, but the century’s almost over.”) There is an awareness that for a moment a perfect balance was struck (with Hawks, for instance), but that trying to reproduce it would be pointless, that new media are emerging, and that the material nature of the image is mutating. What is ambiguous about Godard, as well as his New Wave friends, is that his cinema straddles this change of direction. In a way, he knows too much.

For he is not just a great filmmaker. Once again, he excels at being the filmmaker who expects everything from cinema, including “that cinema should free him from cinema,” to paraphrase Maitre Eckhart. He foils our calculations and disappoints those who worship him too readily; Godard has always kept moving, in every sense of the word, within a film-world that is still big enough to allow you to move about and show your restless energy. He is a philosopher, a scientist, a preacher, an educator, a journalist, but all this is as an amateur; he is the last (to date) to have been the (coherent) witness and (moral) conscience of what’s afoot in cinema.

One could argue that all contemporary filmmakers, provided they feel strongly enough about certain issues, can come to terms with the “death” of cinema and its future metamorphoses. Judging from the radicalism of Duras and Syberberg, the technological utopias of Coppola, not to mention the submerged iceberg of “experimental” filmmakers and video artists, it is clear that these filmmakers have accepted the notion that cinema belongs to the past. If Godard, like Rossellini in his day, had given up his starting point (cinema) and had let himself be proclaimed a preacher or a prophet, his image would be more clear-cut. But he has consciously resisted being categorized this way.

For it should not be forgotten that there is a difference between prophets and inventors. Using established forms as a starting point, Godard “invented” (indeed, cobbled together) the current shape of our perception of images and sounds. He has always been a little ahead of his time, but nothing has protected him from the average illusions of the day (and when his films become more political, crafty though he was, he came up against the same naivete and dead-ends as any other “Maoist” of the age). Vertov was a prophet, and Godard is, strictly speaking, his contemporary. The aesthetic strokes of genius of his early career simply allowed him to be slightly ahead of his audience (and for a little longer than anticipated). Otherwise, like many formal inventors, he advances back-to-front, apprehensively, facing what he is leaving behind. He is not so much the man who opens doors as the one in whose gaze a previously familiar and natural landscape changes with hindsight: he is worn down by an alarming feeling of alienation and overcome by the mystery that occurs when one feels that one no longer knows how to do things.

This sums up the Godard paradox. He is caught between a recent past and a near future (unlike prophets who can easily combine archaism and the future), he is crucified between what he can no longer do and what he cannot yet do, in other words, he is doomed to the present. Despite his strong sense of dialectic, we should not forget this sharp and voluntarist taste for the present, to which he is inextricably bound. He is able to find this present through a tremendous manipulation of contradictions, or, to save time, through a mysticism of the image, the ultimate in reality. Godard is too Bazinian to commit himself to the loss of “reality”, which is replaced by a generalized interplay of references from one image to another, or to an acceptance that the image can no longer be used as a human means of communication, even negatively.

Godard has been so easily described as an “enfant terrible,” an “avant-garde filmmaker,” an “iconoclast” and a “revolutionary” that we have failed to notice that, right from the start, he respected the rules of the game (unlike Truffaut). In fact, Godard is troubled by the absence of rules. There is nothing revolutionary about Godard, rather, he is more interested in radical reformism, because reformism concerns the present. He never implicates the audience, financial profits or producers, or even certain ways of making films. His own utopia is to demand that people open themselves up to the possibility of doing things “differently” even while continuing as before. This utopia is less about doing something different than about doing the same thing, differently. At that price, it continues to bear fruit.