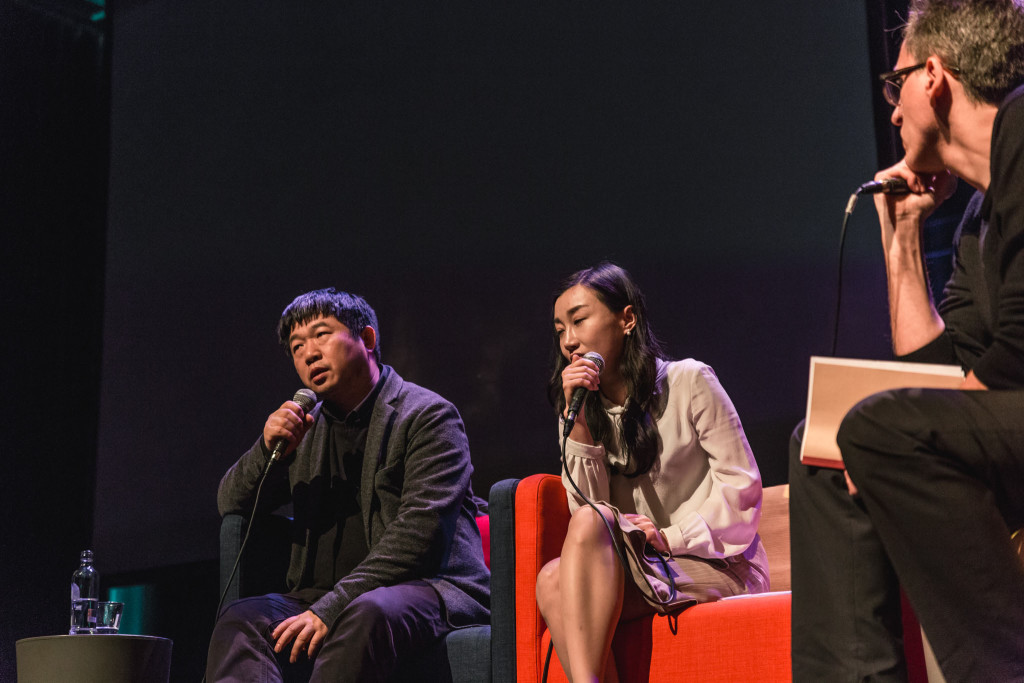 “I think that the most interesting thing to do in films is not to create a story – in any case, I’m not the kind of filmmaker who sets out to create one. I prefer to look at people. If you look at an interesting person for a while, then you will realize that in that person’s life there is a very interesting story. When I meet someone and his or her story really attracts me, then I decide that I would like to make a film about him or her. When I decide that there’s something really beautiful about that person, and that his or her life really touches me, is the moment when I want to film.”

At the turn of this century, Wang Bing entered film history when he boarded a freight train with a small rented DV camera and started filming the snowy landscapes of the industrial district of Tiexi in northeastern China. For the following two years, the former photography and art student documented the decline of the district’s state-owned factories, tirelessly following the remaining workers in the corridors and expanses of the complexes. Out of the three hundred hours of footage, he created the monumental West of the Tracks (2002): a three-part, nine-hour document of China’s transition from state-run to free market economy, and the ensuing desolation of the working class that makes way for an expansion of cheap and precarious labour. From then on out, Wang Bing has continued to chronicle the everyday lives of those who find themselves in the margins of society amidst the vast and rapidly changing landscapes of 21st century China, unveiling what all too often remains invisible under the guise of its “growth miracle” and its willful cancellation of historical memory.

Driven by an unceasing desire to film and to discover, Wang Bing never ceases to explore new places and situations, allowing himself to be led by chance encounters and the epiphany of the unexpected. From the Tiexi district, he moved his centre of activity towards the northwestern regions of China. In the Gobi Desert, he worked for several years in secret on The Ditch (2010), his only fiction feature to date, which recounts the struggles to survive in Jiabiangou, one of the labour camps that were in use during Mao Zedong’s Anti- Rightist Movement in the years from 1957 to 1961. More southwest, in the province of Yunnan, he documented the lives of a broken, impoverished farmer’s family in a small mountain village in Three Sisters (2012) and the inmates of a decrepit mental hospital in ‘Til Madness Do Us Part (2013), before following refugee families fleeing the ongoing civil war in Myanmar in Ta’ang (2016) and travelling with migrant garment workers to the southeastern city of Huzhou in Bitter Money (2016). Within this internal geography, long-term projects are alternated with more modest but no less powerful ones. During the production of The Ditch, for example, Wang Bing recorded in barely one take He Fengming’s startling testimony of the persecutions that she and her family endured throughout the Anti-Rightist Movement and the Cultural Revolution. While filming Three Sisters, he met two adolescent boys whose daily experience of ennui and repetition in a cramped factory-owned hut he captured in a handful of fixed long shots. And in the course of documenting Huzhou’s urban world of sleepless sweatshops and labourers, Wang Bing spent a week along the desolate shores of the Yangtze River in order to film the last days of Mrs. Fang before she passed away.

From the brutal conditions of modern-day slavery to the barren vestiges of disappearing histories, from youngsters squandering their time to elderly in the face of death, from the industrious to the recumbent, the striking oppositions and reversals in Wang Bing’s work are also accompanied by a common perseverance: a determination to extricate from the core of exhaustion the ultimate fragments of the possible. Carefully navigating his camera through the encountered spaces, respectfully juggling the balance between distance and proximity, he patiently searches to capture the actuality and capacity of people who could be identified as seeming to experience little more than “bare life”. Instead of enclosing those ignored by the radar of History in a confined framework that supposedly befits their miniscule lives, he chooses to give them time to exist, opening up their lifeworld in order to affirm how their bodies, voices and gestures, too, have a story to tell.

In collaboration with CIFA (Chinese Independent Film Archive), KASK / School of Arts and Cinematek, with the support of the Department of Chinese Studies, Ghent University.

Special thanks to Zhang Yaxuan and Xu Lin.

On the occasion of this program dedicated to the work of Wang Bing, Courtisane, Sabzian and Cinematek have collected a series of writings and interviews in a small-edition publication.