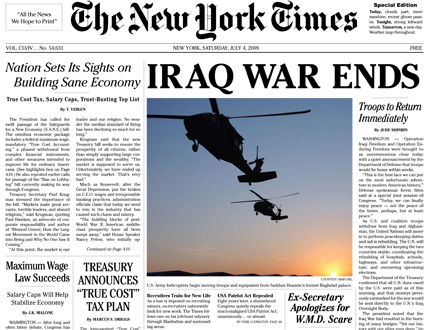 In an elaborate hoax, pranksters distributed thousands of free copies of a spoof edition of The New York Times on Wednesday morning at busy subway stations around the city of NY. The paper, an exact replica of the NYT, includes International, National, New York, and Business sections, as well as editorials, corrections, and a number of advertisements, including a recall notice for all cars that run on gasoline. There is also a timeline describing the gains brought about by eight months of progressive support and pressure, culminating in President Obama’s “Yes we REALLY can” speech. (The paper is post-dated July 4, 2009.) The hoax was accompanied by a Web site that mimics the look of The Times’s real Web site. A page of the spoof site contained links to dozens of progressive organizations, which were also listed in the print edition. Later on that day, the Yes Men issued a statement claiming credit for the prank.

According to the NYT’s City Room blog, there is a history of spoofs and parodies of The Times. Probably the best-known is one unveiled two months into the 1978 newspaper strike. A whole cast of characters took part in that parody, including the journalist Carl Bernstein, the author Christopher Cerf, the humorist Tony Hendra and the Paris Review editor George Plimpton. And for April Fool’s Day in 1999, the British business executive Richard Branson printed 100,000 copies of a parody titled “I Can’t Believe It’s Not The New York Times.” Also that year, a 27-year-old Princeton alumnus named Matthew Polly, operating a “guerrilla press” known as Hard Eight Publishing, published a 32-page spoof of the newspaper.

Could the lawyers be far behind? Not surprisingly, the corporate targets of the parody were not pleased. Now, in what is becoming an all-too-familiar trend, one of those corporations has attempted to shut down the site by putting pressure on what is often the weakest link in the online speech chain: the domain name registrar. Stymied by the First Amendment and other legal impediments, those who don’t appreciate critical commentary and other “objectionable” online content have found intermediaries — providers of indispensable technical services like domain name registration and web hosting — much easier to intimidate.

This time, the complaining (and overreaching) party was the South African diamond conglomerate De Beers, the target of a critical fake ad on the web version of the New York Times spoof announcing that diamond purchases “will enable us to donate a prosthetic for an African whose hand was lost in diamond conflicts.” Miffed by the criticism, De Beers responded not by confronting the authors (whose parody is protected by the First Amendment) but instead by threatening their Swiss-based domain name registrar, Joker.com. De Beers has demanded that Joker.com disable the spoof website’s domain name or face liability for trademark infringement.

This certainly isn’t the first time that a sore target of criticism has threatened an internet intermediary in order to take down content it didn’t like. The motivation is simple: all too often, the intermediary will prove to be unwilling to stand up for the rights of its customers. For example:

* In September, 2008, the state of Kentucky initiated an ex parte proceeding aimed at seizing 141 domain names pointing to overseas websites permitting online gambling, arguing that the domain names were illegal “gambling devices” under Kentucky law. Without giving the domain name owners an adequate opportunity to defend themselves, the trial court ordered the registrars with control over the targeted domain names to transfer them to the state, a decision the court affirmed in October. Upon receipt of the court’s order, some of the registrars (such as GoDaddy) who were likely outside of the court’s jurisdiction nonetheless locked the domain names and purportedly transferred control to the Kentucky court. (EFF filed an amicus brief arguing that the orders were unconstitutional; the matter is pending appeal.)
* In January, 2008, Swiss bank Julius Baer filed suit against (among others) Dynadot, the domain name registrar with which the domain name wikileaks.org was registered. The Wikileaks website to which the domain name pointed — a self-styled “uncensorable Wikipedia for untraceable mass document leaking and analysis” — hosted (and still hosts) documents which anonymous third-party posters argue document financial wrongdoing. Instead of challenging the operators of the Wikileaks site directly, Julius Baer targeted Dynadot which quickly agreed to lock and permanently disable its customer’s domain name. (In response to briefs such as the one filed by EFF pointing out the illegality of the court’s order approving of the ill-advised agreement, the district court ultimately dissolved the permanent injunction, leading Julius Baer to dismiss its case.)
* In December, 2006, on behalf of its affiliate radio station KSFO-AM, media giant ABC sent a cease and desist letter to 1 & 1 Internet, the then-host of the blog www.spockosbrain.com, a site that criticized what its author argued was offensive and violent rhetoric broadcast by KSFO. Despite the fact that it had no risk of liability, 1 & 1 Internet promptly shut down Spocko’s site in response to receiving the threatening letter. (EFF subsequently represented Spocko, successfully moving him to Computer Tyme, a web hosting company that promised to stand up to future threats.)

Intermediaries frequently argue (incorrectly) that they have no choice but to shut down domain names or sites when they receive a legal complaint. But they do have a choice, at least in the United States. As EFF has explained to De Beers, U.S. law provides ample protection for intermediaries, in large part to ensure that online speech and commerce continues to thrive. For example, in 1996, Congress passed Section 230 of the Communications Decency Act which immunizes internet intermediaries from most kinds of liability associated with the content that their customers place on their own sites. Similarly, the Digital Millennium Copyright Act (passed in 1998) provides a safe harbor from copyright infringement liability for intermediaries who follow straightforward procedures in response to valid takedown notices. With these strong legal protections, intermediaries can and should refuse to respond to pressure from companies like De Beers.

Will the poignant work of the New York Times parodists stay up for the world to see? Will other critical online speakers be silenced by improper threats against their virtual soapboxes? The answer may ultimately depend more on the ability of targets to intimidate domain name registrars than on the legality of the underlying speech itself.