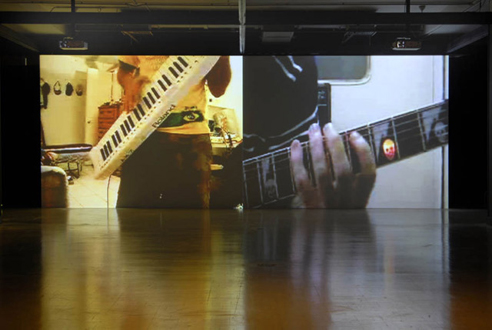 If you liked Oliver Laric’s ‘50 50‘ videos I posted some time ago, you’ll probably dig this one as well. In the installation ‘a couple thousand short films about Glenn Gould’ (2007), Cory Arcangel rescores Johann Sebastian Bach’s famous 1741 composition the ‘Goldberg Variations’, based on nearly 2000 clips of amateur musicians’ performances taken from video sharing web sites such as YouTube. Each note of the score jumps between individual clips of different musicians, with each screen carrying a separate melody line. The final effect is an almost hallucinatory montage – a flood of images which we are engulfed into. Arcangel allows anonymous guitarists, keyboard players, tuba players and other enthusiasts from around the world to unintentionally collaborate in recreating Bach’s masterpiece.

From an article in Frieze (on Paul Morley’s essay in the book ‘Cory Arcangel: a couple thousand short films about Glenn Gould‘:
“Does user-generated content make possible a new form of artistry, prefigured in both Gould’s approach to the recording studio and in Wendy Carlos’s synthesizer renditions of Bach? Or are Gould and Carlos being positioned as anticipating the dissolution of the individual artist in an anonymous digital network?

As Kirby indicates, far from leading to new forms, user-generated content has tended towards retrenchment and consolidation – for example, YouTube (for the most part) recycles old material, or else provides a space in which millions of aspirant stars ape idols whose status – established by the old systems of distribution and valuation – remains secure. Instead of being cowed by the relentless demands for viewer participation, both cultural producers and the much-derided ‘gatekeepers’ need to find new ways of asserting the primacy of production over consumption. They need to find ways of stepping outside seamless circuits in which ‘everyone’ is implicated but no-one gets what they want. In another catalogue essay for a couple thousand short films…, curator Steven Bode argues that Arcangel’s installation is ‘less an advert for networked participatory culture than an index of people’s increasing atomisation.’ If postmodern culture presents a kind of networked solipsism, perhaps what Gould can now teach us most is the value of disappearance from the screens that eagerly seek our image. Gould, who famously retired early from concert playing, showed that sometimes it is necessary to withdraw in order to find better ways to connect.”