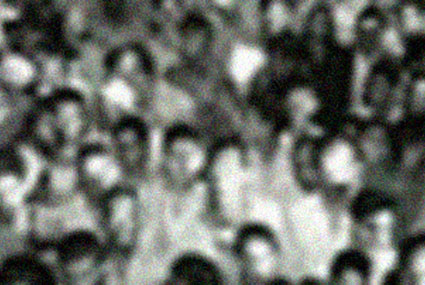 Lately I’ve been doing some research on the recycling of images, mainly focussing of filmmakers who use pre-existing footage to explore how time, memory and perception is constructed, delving beyond the intended message, disarticulating and rearticulating media rhetorics, subverting the image, exploring the limits of representation, to problematise and decentre the gaze, to bring forward the contradictions and aporias in the image, to show what is being excluded, reduced, denied. More on that later.

Somehow related to that I got interested in the Adam Curtis films. Last year Ken Jacobs recommended me the powerful ‘Power of Nightmares’ series, which basically investigates parallels between the rise of the Neo-Con movement in the US and radical Islamist ideology (of course never shown on Belgian – or American for that matter – TV, but available for free on the net via Archive.org, published with a CC licence), and now I’m systematically looking for and watching his other works, especially ‘Pandora’s Box’ (examines the dangers of technocratic and political rationality), ‘The Living Dead’ (investigates the way that history and memory have been used by politicical forces), ‘The Mayfair Set (looks at how the climate of the Thatcher years was shaped by a club of buccaneer capitalists), ‘The Century Of The Self’ (documents how the rise of Freud’s individualism led to Edward Bernays’ consumerism) and his latest ‘The Trap – What Happened to our Dream of Freedom’ (which is, as Brian Holmes suggests, about “coming to grips with one of the great enigmas of the present: how neolib goes neocon”). In all of these works (made for the BBC) Curtis uses the same method: he delves deep into the history of the 20th century and explores genealogies of power, how ideas and ideologies have grounded and spread over time, how our image of the world, reality and identity, is constructed, and history is (re)written. Although these stories are partially based on conventional models of ‘talking heads’ interviews and didactical documentary clips, they really stand out for their use of, in this case literally, “found” footage. Curtis: “‘The BBC has an archive of all these tapes where they have just dumped all the news items they have ever shown. One tape for every three months. So what you get is this odd collage, an accidental treasure trove. You sit in a darkened room, watch all these little news moments, and look for connections.” Curtis does not only use footage that is regarded as “historically authentic”, but also includes fragments of commercials, fiction films, scientific clips and popular music in an uncanny fashion, resisting the linear movement of the traditional documentary narrative, a method, as Curtis admits freely, that didn’t come very natural: “it was just a disaster until I suddenly realized you just throw anything in you like. It is out of desperation.”

Curtis communicates his critical perspective by building on the ruins of our audiovisual memory, realigning the dismembered body of the past with the constellation of the present, creating in his montage, as Errol Morris suggest, a powerful resonance, that really accents the fundamental message of his works: “Here stock-footage becomes expressionistic – never literal – an excursion into a dream – or, if you prefer – nightmare.” The results are, as Brian Holmes writes in his wonderful essay, audiovisual experiences that “come very close to reproducing the uncanny gap one often feels between the steady flow of inner discursivity and the startling movements of one’s own imagination (…) hour-long bursts of awareness that what we are living through today has been constructed, that behind common knowledge there are hidden sciences, and that government is basically the choice of a ruling epistemology, about which the public is never sufficiently informed. Curtis, like Foucault, consistently asks: “Do you want to be governed like that?” And he asks it with respect to the most contemporary forms of psychological manipulation, of military and security rhetoric, of economic doctrine and workplace organization. These are alarm-clock films, wake-up calls for passive populations whose only recourse would be to think sociologically: but not as their masters do.”

Read more:
Eli Horwatt, ‘Refuse is the Archive of Our Times. The Metaphorical and Expressionistic Use of Found-Footage in the Documentary Films of Adam Curtis and Craig Baldwin’
Brian Holmes, ‘NEOLIB GOES NEOCON. Adam Curtis, or Cultural Critique in the 21st Century’

and of course, watch.