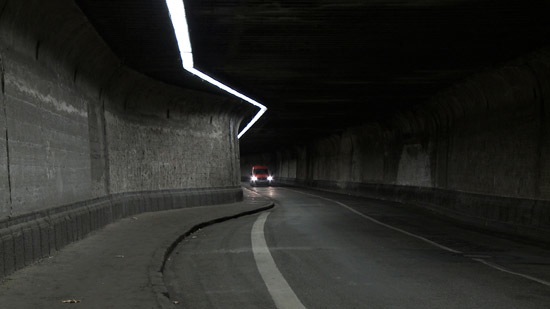 “I know very little about the Ruhr Region, in fact it is hard for me to pronounce its name – and I’ve never shot High Definition before. Yet I believe I have made a film true to my feelings of this place. Ruhr takes a look at some of the labor performed here and the processes controlled by that labor. It is about things that reoccur and the subtle changes that happen. It asks you to look and to listen.“
– James Benning

James Benning has been one of my favorite filmmakers ever since I saw his ‘California Trilogy’ (1999-2001) and the magificent duo ’13 Lakes’ and ‘Ten Skies’ (both 2004), that were screened as part of the Argos Festival 2005 (where I was working at the time). Although Benning has been making films since the beginning of the 1970’s and has produced several wonderful film works since 2004 (Notably ‘Casting A Glance’ and ‘RR’, both finished in 2007), these particular films, as Scott MacDonald wrote in his essay ‘James Benning’s 13 Lakes and Ten Skies, and the Culture of Distraction’ (in “James Benning” ed. by Barbara Pilcher & Claudia Slanar, 2007), can be considered as “an epitome, a quintessence, of his career”. These explorations of the American landscape are certainly among his most accomplished – in Benning’s own words – “attempts at seeing (and listening to) rural, urban and savage environments as ‘places’, presenting these places in aesthetical, socialeconomic and political terms”. At the same time, continued MacDonald, “they may signal a kind of conclusion”. In 2007, Benning stated that he was growing tired of the film medium and wanted to start exploring the digital area (he’s not the only one: see the recent work of Ernie Gehr, for example).

This is an excerpt from an interview MacDonald did with Benning around that time (‘Testing your patience‘, published in ArtForum, 2007):

MACDONALD: You’ve mentioned that ‘casting a glance might be your last 16-mm film.
BENNING: I would say my use of 16 mm is going to end soon. It’s become so stressful to finish a film and go to the lab and try to get good prints. Then it’s even more stressful to go to screenings, because I’ll get a good screening, an appropriate screening, one out of every five times, and three out of five will be god-awful. The projector will have a lot of movement in it, or it won’t focus across the image, or the sound will be garbled, or the gate will be all dirty, or they’ll scratch my film. A print lasts about five or six screenings now, which is expensive and frustrating. On the other hand, once in a long while, a screening will be perfect, as it was the other night at Colgate. I see that and I think, “Well, 16 mm is still possible.”

MACDONALD: You’d move to digital?
BENNING: Yeah. I am depressed about feeling forced out of my craft, but I’m also excited to try to learn a new trick, at my age. The change will make me contemplate a whole different way of imagemaking. I’m sure I’ll be frustrated, and who knows, I could come back and make a film once in a while. But I suspect that soon 16 mm just isn’t going to be there.

Here’s another excerpt from an interview with Cinema Scope, on the occasion of the release of ‘RR’ (‘Trainspotting with James Benning‘, 2008)

SCOPE: Is it true that this is your last film on 16mm?
BENNING: As far as I know, yes. I don’t want to shoot 35mm as I don’t want to get into that kind of money. I’ve always been against spending lots of money on projects, and I sometimes think that if a lot of my films were 35mm or 70mm they might turn into a coffee-table book. There’s something about the small gauge that makes them more real for me. But now, yeah, I’m disturbed that I’m being forced out of my craft by new technologies that are developing that are getting more attention, that means there’s less attention on what I’ve been working in. And nobody’s aspiring to be a good 16mm projectionist except James Bond in Chicago, there’s nobody else who even can fix them. And the labs, they make believe they still do good work but they don’t pay attention to it at all.

SCOPE: So you would still shoot in 16mm if there were good labs and good projection then?
BENNING: Yeah, I probably wouldn’t even have thought of getting out of it. But in a way I’m kind of glad, because I could just do the same thing for the rest of my life. This is going to cause me to do a complete rethinking of image making. I’m both mad and excited at the same time.

The result of this decision can now be marvelled at on the big screen. ‘Ruhr’ is not only Benning’s first foray into digital filmmaking, it’s also the first work he shot outside the US. It presents his perspective on the Ruhr district in Germany, a region formed by coal mining, industrialization and its working class inhabitants – a environment he feels connected with, having grown up in Milwaukee’s industrial valley (see his film(s) ‘One Way Boogie Woogie / 27 Years Later’ (1977-2004). In order to get to know the place, Benning set out on small trips and documented his findings on High Definition digital video. About 20 shots were taken, but only 6 of them ended up in the film, which Benning doesn’t consider as a portrait, but rather a “deep map” of the Ruhr region.

The switch to the digital medium also had an impact on the structure of ‘Ruhr’. The shots he composed for his earlier 16 mm films were limited to a duration of 11 minutes – the maximum amount of film that can be recorded in a single take on a 400 foot roll shot at 24 frames a second – which was a determining factor of many of Benning’s rigorously structured works (for example, ’13 Lakes’ and ‘Ten Skies’ are both composed entirely of ten-minute takes). With modern card storage systems, however, shots can last up to several hours. Benning investigated this potential in ‘Ruhr”s last shot, the image of a coke plant’s belching smokestack that slowly fades to blackness. The shot, that lasts for one hour, seems continuous, but was actually edited: the sensitivity of digital video does not only render the movements in the image more subtle, even more “dramatic”, but also makes it possible to “completely hide the ellipse of time” with dissolves. Other shots in ‘Ruhr’ have also been manipulated in that way: certain moments are edited out, in order to focus on the iterations and heighten the awareness of the spaces.

Perhaps, as Michael Ned Holte suggests in his review (ArtForum, January 2010), for Benning, “the true promise of HD lies in its capacity to capture images at durations that push the limits of the viewer’s attention toward an almost-inhuman scale of time—albeit in a physical way that an all-too-human viewer, seated in the theater, will surely register.” It’s a promise that brings him – and us – a step closer closer to the cinematic ideal that MacDonald has written about: an ideal, “that functions as a metaphor for one of the essential quests of life: our desire to make the most of the perceptual opportunities provided by the moment to moment incarnation of the sensory and sensual world around us in the face of our inevitable decay and mortality.”

Listen to Benning talking about ‘Ruhr’ in this interview.
Also of interest: Benning has stated that there will be a DVD publication of some of his works, in collaboration with the filmmuseum Vienna. He is also planning to offer his films as free downloads on the internet.

‘Ruhr’ is coming soon, I hope, to a theatre near you…

In the meantime, here’s a small tastemaker: the trailer Benning created fo the Viennale. For this film, Benning took the steel rolling process, that takes about ten minutes, and condensed it down to one minute by cutting out portions and hiding the ellipses in time with dissolves.