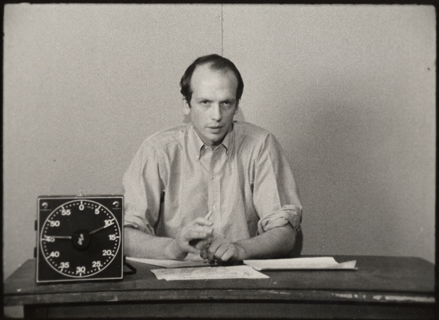 Morgan Fisher (US, 1942) examines and deconstructs with wry humour the machinery of cinema in his 16mm films, operating within the unlikely triangle of avant-garde cinema, film industry and contemporary art, only possible in a city like Los Angeles. Fisher’s films are an exploration of the film apparatus and its physical material, as well as of moviemaking production methods : from film’s standard gauge (35mm) to the use of production stills, the narrative role of inserts and the invisible importance of the projectionist. ”One thing my films tend to do is examine a property or quality of a film in a radical way,” he says. “Being radical is a modest form of being extreme. They each examine an axiom of cinema and say, ‘What if ?’”. Fisher, who counts among his influences the work of artists such as Sol LeWitt, Marcel Duchamp and Ad Reinhardt, uses avant-garde procedures in order to comment on mainstream cinema; as a result his work was marginalised for a long time for not fitting too neatly into any of the usual avant-garde categories. Too concerned with the specifics of industry procedures for the underground; too minimal and conceptual for Hollywood’s taste. In recent years, his film work is finally getting the recognition it deserves, following retrospective programmes at the Whitney Museum and Tate Modern.

At Courtisane Fisher will present a selection of short films directed between 1968 and 1976, most of which will be screened in Belgium for the first time. Two of his later works, Standard Gauge and ( ) will be screened during the HISK master class on Tuesday 23rd. Courtisane has also given carte blanche to Fisher, who will present a selection of films by other filmmakers. 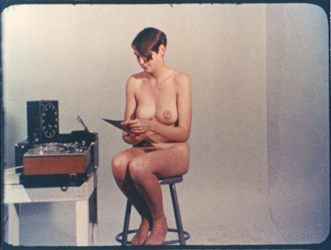 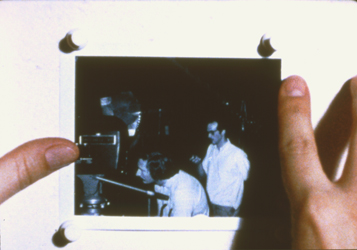 “While the first scene is lipsynched, all the rest of the dialogue is spoken by people outside the frame. It relates the comments of the two people watching the film. Nothing groundbreaking is said: it is mostly about recognition and memory – how it is said is important, not what is said”. (Morgan Fisher)

The phi phenomenon is a perceptual illusion (first described in 1912 by Max Wertheimer) in which a succession of still images produces a disembodied perception of motion. “Phi Phenomenon is astonishing precisely because its object is so familiar, and it fascinates me because it is a motion picture in which there is movement but no apparent movement.” (Thom Andersen)

“A documentary about nothing but itself; technicians become actors, equipment becomes props; the reality captured by the film exists only for the duration of the film. The soundtrack consists of the mumbling and talking of the crew during production. It is at no point lip-synched.” (Morgan Fisher)

“Picture and Sound Rushes takes the form of a lecture in which Fisher’s deadpan discourse describes the various permutations of sound/silence and picture/no picture. These states are demonstrated in the editing, which cuts between them at regular intervals (determined by dividing a roll of film equally by the total number of combinations), with no regard for the audience struggling to follow the dialogue”. (Mark Webber)

“Cue Rolls appears to be a continuous five-and-a-half-minute shot, the visual subject of which is a synchronizer through which four strands of black and white leader are running continuously. As the soundtrack makes clear, Fisher has applied what once was a standard industry practice (for making colour corrections and other modifications before final prints were struck) to a situation in which it would seem to be entirely irrelevant.” (Scott MacDonald) 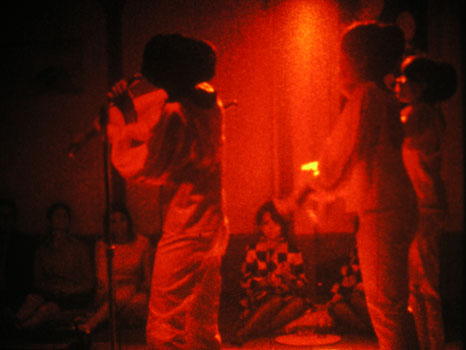 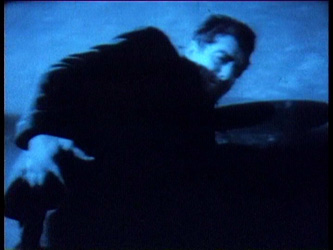 Chris Langdon
Love Hospital Trailer
US, ca.1975, 16mm, color, sound, 3′
“The existence of good bad literature – the fact that one can be amused or excited or even moved by a book that one’s intellect simply refuses to take seriously – is a reminder that art is not the same thing as cerebration.” (George Orwell, quoted here without the permission of the filmmaker)

A compact version of Henry Hathaway’s 1947-movie, refilmed during a 1973-television broadcast with a super 8 camera: 4 or 5 frames from each shot, so that the narrative editing strategies of the whole movie become apparent within 4 minutes. Part of K. Wyborny’s 90-minute film Elementary Film History (1974) and of his 25-minute art-gallery installation Histoire du Cinéma (2004). “I’ve always been very interested in the narrative. My cinema has to do with stretching the narrative until it kind of collapses. I care about the structures, about what they do to one’s mind. Maybe this is being analytical. But I analyze the time structures while I proceed in building them. Structure in itself doesn’t interest me. I am interested only in specific ones which then I kind of try to analyze.” (Klaus Wyborny)

In 1961 Kubelka was hired to document the African Safari of a group of European tourists. Afterwards he hijacked the recorded material and edited it into an analysis of the many layers of violence present in the hunt, the gaze of the hunters and the film itself. The fragmentary and asynchronic montage of images and sounds generates a multitude of connections and associations which, in their turn, evoke a number of metaphorical interpretations. “For me, Afrikareise is, in its own genre, the most intense sound film that exists. Sound and images are in synch like in nature (even if it isn’t about the natural sound of something). The sound becomes the acoustic portrait of the visual action.” (Peter Kubelka)

“I consider Thom and Malcolm’s film to be groundbreaking in its brilliant demonstration of the power of a rule to construct a film that unifies shots taken at different times and places. And it also noteworthy for the new model of the documentary film that it proposes. In describing his film as a parody of montage, Thom is being too modest, if not deliberately misleading. The brilliance of — ——- is that it refuses the power of montage as that idea has been conventionally understood, only to rediscover its power in a different form, on a new plane.” (Morgan Fisher)

“My film takes its material from the situation that people work for four days on an image that is supposed to be published in the centerfold of the Playboy magazine. The naked woman in the centerfold is like a sun with a revolving system around it: Culture, business, living! (You cannot see or film into the sun). One can imagine that people who have to produce an image of such gravitational force have to do it with the same diligence, seriousness, and responsibility, as if they were involved in nuclear fission. Today, printing companies and publishing houses, the advertisement business, hotels and clubs, galaxies of millions of Dollars, a whole commercial cosmos circle around the naked girl in the centerfold of the Playboy magazine; every month, a new girl takes center stage. A single point has no expansion and is invisible. That is what we have filmed.” (Harun Farocki)

In the scores of his dramas and his operas Arnold Schönberg generally describes in detail how everything should happen on the stage. But in the score of the Accompaniment to a Cinematograph Scene (1929-1930), there are only four words : “Threatening, danger, fear, catastrophe.” The interpretation of Straub and Huillet revolves around the uneasiness that Schönberg felt at the rise of anti-semitism in Germany, which violently burst out during World War II. They quote from a series of letters that Schönberg wrote to Wassily Kandinsky in 1923, as well as a speech by Bertold Brecht in 1935. “For Straub and Huillet, Nazism is a central event. But yet, in their films they never use images taken inside of Nazism. Why ? Maybe because they believe that artists’ responsibility is to create their own image, daring and contemporary, of their anti-Nazism rather than conduct a so-called critical and distanced montage of images taken by Nazi cameramen”. (Serge Daney).