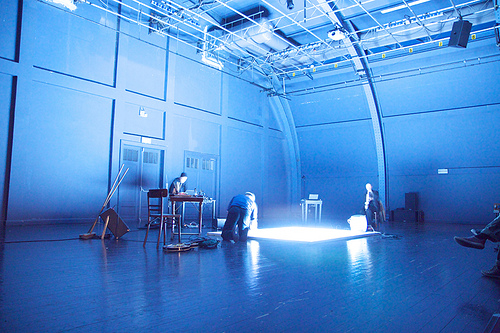 An introduction I wrote for the catalogue:

âWhat we see is inseparable from how we seeâ. This is a quote from a recent article by Brad Butler, one of the guests of this edition of the Courtisane festival. For Butler, our dependence on narrative coherence and transparency is not as innocent and neutral as we seem to think. On the contrary, the flood of easily digestible commodities and self-contained narratives that we process on a daily basis â in cinema, on television, in education, in the news â implies nothing more and nothing less than a form of systematic violence, an evolution towards a fully âfictionalisedâ world.

How can we challenge today those conditions and conventions, so deeply embedded in our social and cultural tissue that we are almost no longer aware of them? Can we, in this strange moment of excess and acceleration, bring ourselves to contemplate what (and thus also how) we see, hear and read? To interrogate? To formulate alternatives? The work of Brad Butler and his partner Karen Mirza is one of the many examples in this yearâs festival programme that proves how possible, but also necessary, it is.

Audiovisual essays, radical formal experiments, impulsive âfilms brutsâ, hybrid performances and installations: the search for alternative cinematographic models takes many forms. Courtisane proposes a kaleidoscopic mosaic of styles, media, gestures, languages and emotions; a patchwork of recent and historical works that share an insatiable hunger for adventure; a personal signature; and above all, an implicit â or sometimes outspoken â feeling of resistance.

Other than the yearly selection of recent Belgian and international films and videos, the programme comprises two thematic evenings filled with performances, installations and screenings. Three âArtists in Focusâ â David OâReilly, Morgan Fisher and David Gatten â will present a combination of their own work and their personal sources of inspiration. The central theme of this yearâs edition is explored in both the exhibition Digest Sound and the programme Vital Signs, which search for the limits of the creation and communication of meaning. For the little ones, we have prepared a new Baby Matinee. âAvant-garde for kidsâ: there is no age to learn to see.

(more info on my events page)

Courtisane festival 2010 – Disinformation, The Origin of Painting from Courtisane Festival on Vimeo.

More videos can be found on our Vimeo page.
Also check out some great stuff from the 2009 edition.