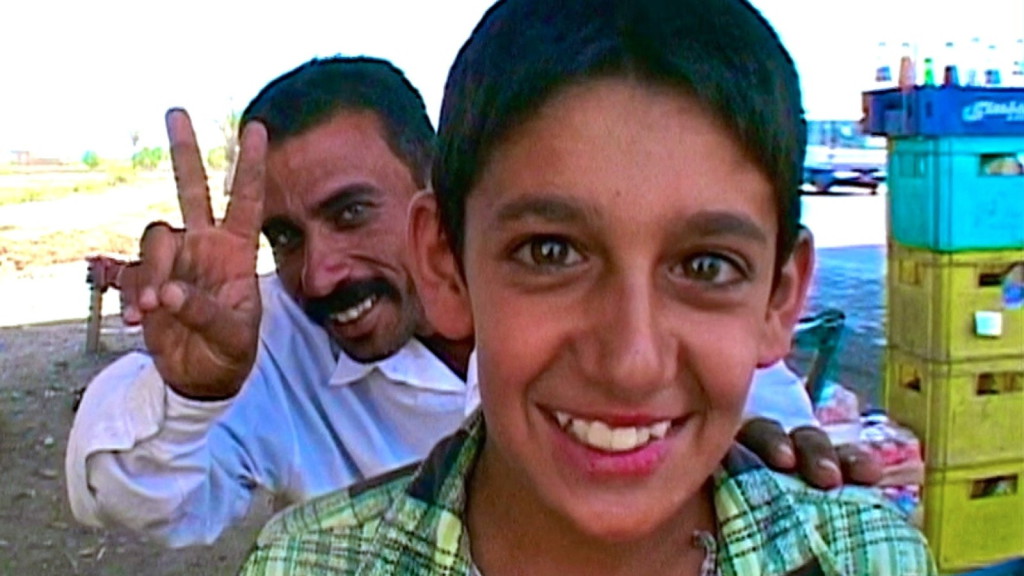 Screening of Homeland: Iraq Year Zero (2015, 334’), followed by a conversation with Abbas Fahdel. Please note that this film will be screened with a 30-minute intermission between Part 1 (Before the Fall) and Part 2 (After the Battle). The conversation will start around 19:00.

“With this film I wanted to give a face to the Iraqi people,” says Abbas Fahdel about his most recent film, the magnificent Homeland: Iraq Year Zero. What does it mean to give a face to a people? How can cinema accomplish this trying task? Twenty-five years ago, while commenting on the coverage of the Persian Gulf War, Serge Daney remarked that one crucial element was missing: the eyes of the other. This was a conflict, he argued, that was basically a face-off between two ways of not making an image, as both camps pulled back to their own “visual,” consisting of nothing but a calculated flow of clichés and stereotypes which no longer testify to anything “other.” Shots without reverse shot, visualizations without information, winners without losers: nothing but an optical verification of power. In this sphere of pure signalization, nothing resists any longer.

Were things any different when, eight years later, the “coalition of the willing” decided to invade Iraq? Did we get see, here in “the West”, anything else but current event reports that participated in the installment of a palpable sense of insecurity and inevitability, anything else but non-stop non-information expressing the urgency of an invisible threat and the necessity of a calculated response? It’s not that there were no images, it’s that the images we saw were all too often anticipated by their meaning, reduced to illustrations of the words of those who decide which images are valuable and claim the authority to explain what they mean, trapping them in slogans, headlines, captions. It’s that most of these images were already part and parcel of the ubiquitous rhetoric that staged the righteousness of those avengers who waged war against the axis of evil in the name of infinite justice, a war that has cast a whole part of the world in a terrible chaos whose dreadful consequences are still with us. What was missing, what remains missing, are the faces and voices of those who are often spoken about, without being given the space to speak for themselves. Here lies the greatness of Homeland: in giving us to see so much of what is missing, in making us experience how the other is the same, bearing the same capacities of speaking and listening, but also how the same is itself other, always engaged in the measure of distance.

Measuring the distances and proximities between here and there, between now and then: this task might have also been what has led Abbas Fahdel to make the film. Born in Babylon, he moved to Paris at the end of the 1980s, when the war between Iraq and Iran was still raging, to study cinema at the Sorbonne (where one of his tutors was Serge Daney). It was only in February 2002 that he returned to Iraq to capture everyday life as his country prepared for war. Working clandestinely, he zeroed in on the intimate lives, daily activities and domestic conversations of his friends and family members, in particular his 12-year-old nephew, Haider, who would become the heart and motor of the film. A few days after Abbas Fahdel had returned to Paris, the war broke out, on 20 March 2013. When he managed to go back to Iraq a few weeks later, Baghdad had already fallen and hope for change for the better was quickly fainting. Against the grain, he went on filming the struggle for existence amidst turmoil and ruination, an endeavor which came to a tragic end when Haidar was killed by a stray bullet. Saddened by this violent loss, it took the filmmaker ten years to be able to watch the images that he had made and eventually make them into a film. After the work of mourning came the work of memory. The task of testifying to the lived reality of a past that continues to rumble in our present. The responsibility of bearing witness to the recent history of a country whose markers of memory have been systematically demolished. The quest to give the people of Iraq something other than the abstract and reductive identities that have been assigned to them: to give them a face of their own, a face that dazzles in all its persistence and resistance. For this and so much more, Homeland is not only praiseworthy: it is necessary.