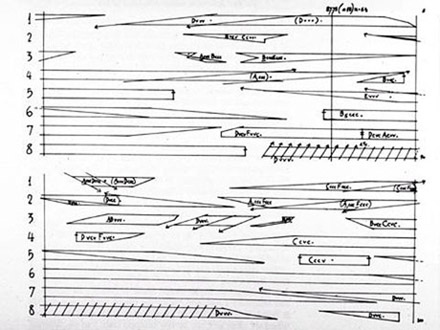 “If this word ‘music’ is sacred and reserved for eighteenth and nineteenth-century instruments, we can substitute a more meaningful term: organisation of sound.”
John Cage, ‘The Future of Music: Credo’ (1937)

Just some notes on the (dis)organisation and classification of sound. I’ve been researching this a little bit in the context of the ‘Order of Things’ project, and became intruiged by some historical pieces. The score above is from John Cage’s ‘Williams Mix‘ (1952), which is constructed from recorded sounds divided into six types:

Sounds were further categorized by the predictability or unpredictability of their frequency, timbre and amplitude. These parameters could be “controlled” (predictable) or “variable” (unpredictable). So: Acvc = city sound, controlled frequency, variable timbre, controlled amplitude. The process of creating this piece, as Cage explained, involved the precise cutting/splicing of recorded sounds to create eight separate reel-to-reel, monaural, 15-ips magnetic tape masters for the 4-minute 15-second, octophonic tape piece. The 192-page score is, as Cage referred to it, a kind of “dressmaker’s pattern–it literally shows where the tape shall be cut, and you lay the tape on the score itself.” Cage explained further in a published transcript of a 1985 recorded conversation with author Richard Kostelanetz that “…someone else could follow that recipe, so to speak, with other sources than I had to make another mix.” Later in the conversation, Kostelanetz observed, “But, as you pointed out, even though you made for posterity a score of Williams Mix for others to realize, no one’s ever done it,” to which Cage replied, “But it’s because the manuscript is so big and so little known.”

This kind of “Sonic Taxonomies” were also used by Futurist Luigi Russolo, who organised sounds in six families of noises of the futurist orchestra. In his ‘Art of Noises’ (1913), Russolo wrote: “In this inventory we have encapsulated the most characteristic of the fundamental noises; the others are merely the associations and combinations of these. The rhythmic movements of a noise are infinite: just as with tone there is always a predominant rhythm, but around this numerous other secondary rhythms can be felt.”

Later, Stockhausen also made a classification of 68 sound types for the 33 “moments” that comprise his piece Mikrophonie I (1966):

Holger Czukay (who was once a student of Stockhausen, before he started with CAN) wrote about this piece: “Four musicians were standing at a huge tam-tam with some “creation tools” and a microphone in their hand. The tam-tam was prepared at parts with chalk or colophony so that a hard paper bucket for example could scratch upon the chalk- or colophony field (The material which a violinist is contacting his bow to before he starts playing so that he is able to create a tone). Or an electric razor was another device which created a rich world of sounds, when it was touching the surface of the tam-tam. Two microphones was scanning the different sound areas of the tam-tam and got connected with 2 Maihak W49 radio play Eq’s, passive filters with a strong cutting characteristics (years later I was able to get hold of them at an undertaker’s shop). Stockhausen was sitting in the audience at a little mixer and created something like a “tam-tam live dub mix”. If you are able to attend such a performance these days, it still would sound completely up to date. Such a thing together with a right DJ could perfectly fit into the end of the nineties.”

Below are also some really nice notations I found on the net, starting with Varèses’s classic ‘Poème Électronique’, created for the Brussels’s World’s Fair of 1958, in collaboration with Le Corbusier and Xenakis. The technology available to Varèse at the time he created Poème Électronique was out of reach for most of his life, forcing him to realize his unique vision through conventional instruments. When early electronic instruments became available, Varèse was quick to use it towards his goal of “organized sound.” Varese’s intention – as stated in “the Liberation of Sound” – was “Liberation from the arbitrary, paralysing tempered system; the possibility of obtaining any number of cycles, or, if still desired, subdivisions of the octave, and consequently the formation of any desired scale; unsuspected range in low and high registers; new harmonic splendours obtainable from the use of subharmonic combinations now impossible; the possibility of obtaining any differential of timbre, sound-combinations and new dynamics far beyond the present human powered orchestra; a sense of sound projection in space by the emission of sound in any part or in many parts of the hall as may be required by the score; cross rhythms unrelated to each other, treated simultaneously, or to use the old word, ‘contrapuntally’, since the machine would be able to beat any number of desired notes, any subdivision of them, omission or fraction of them- all these in a given unit of measure of time which is humanly impossible to attain.” 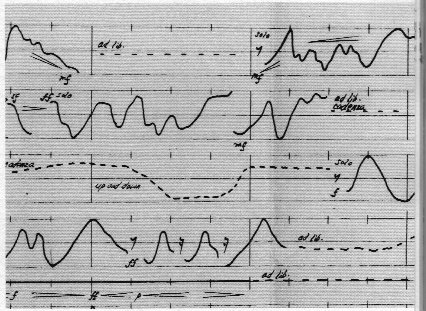 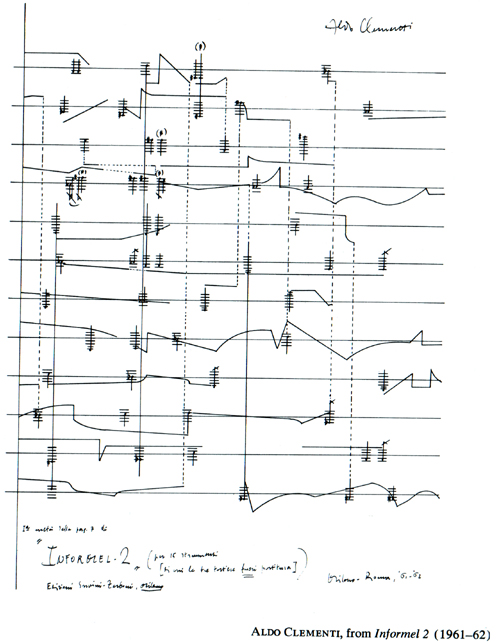 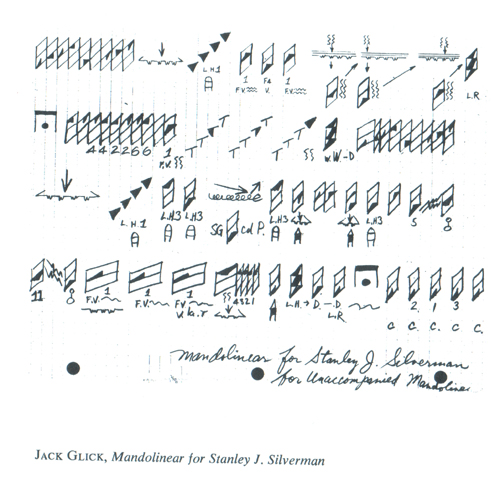 James Drew, Lute in the Attic 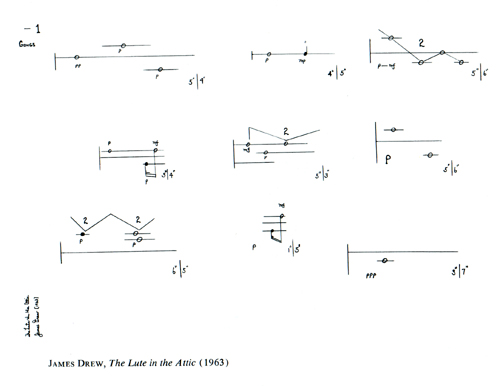 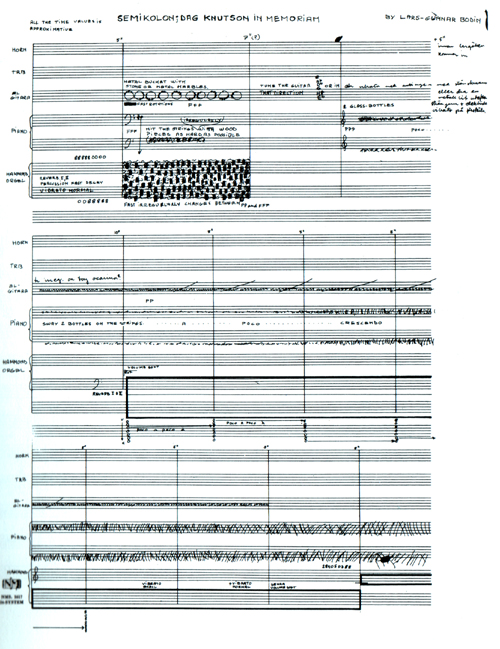 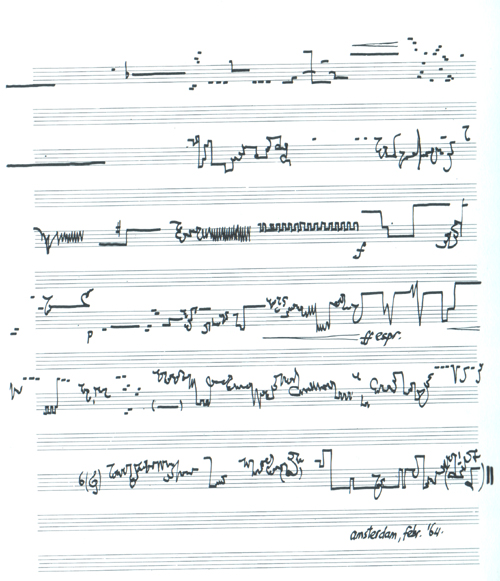 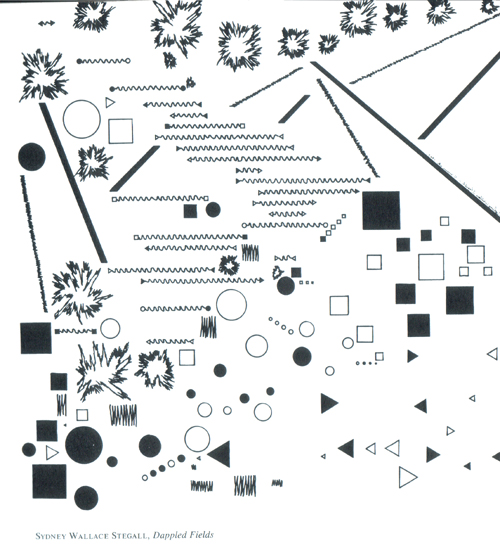 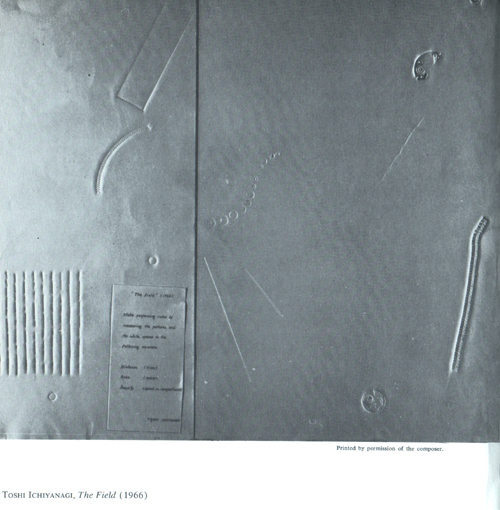 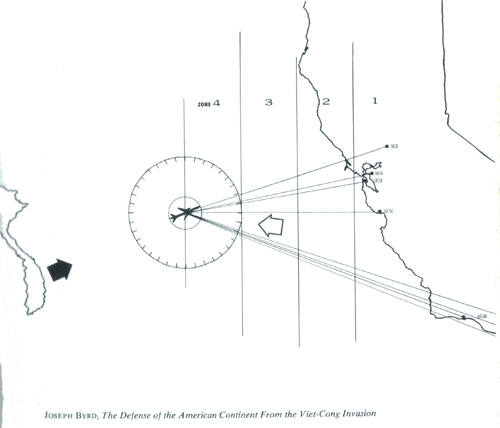 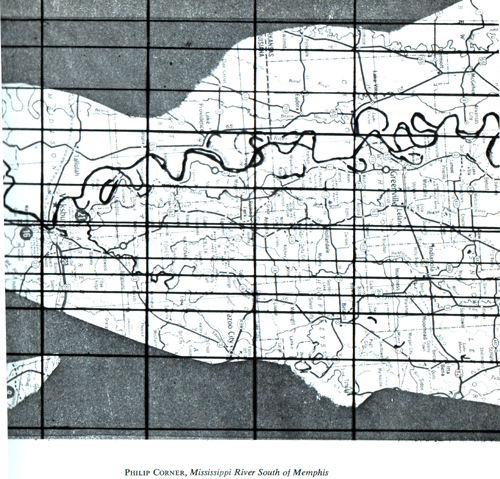 AM Fine, Song for George Brecht 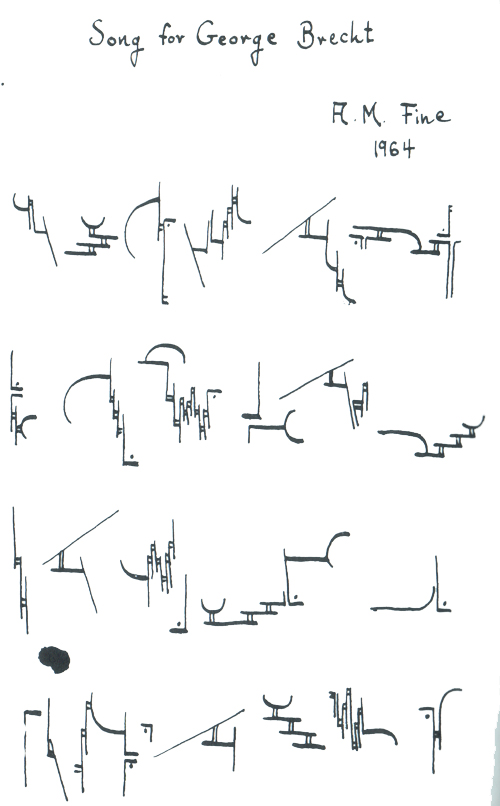 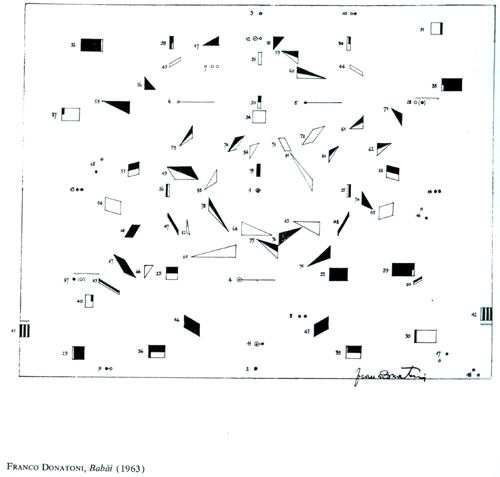 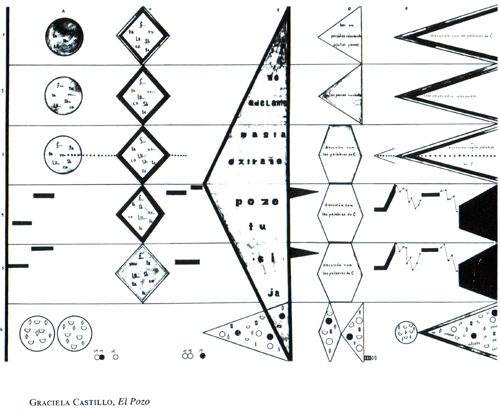 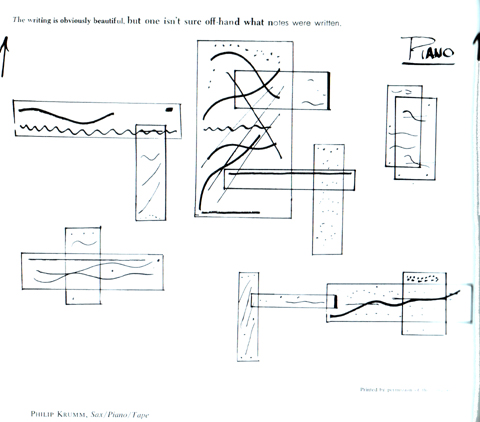 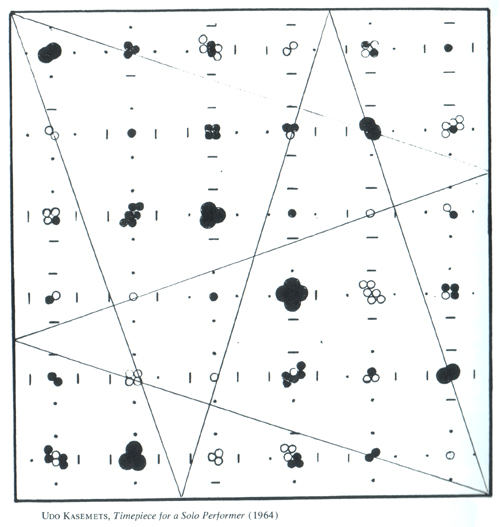 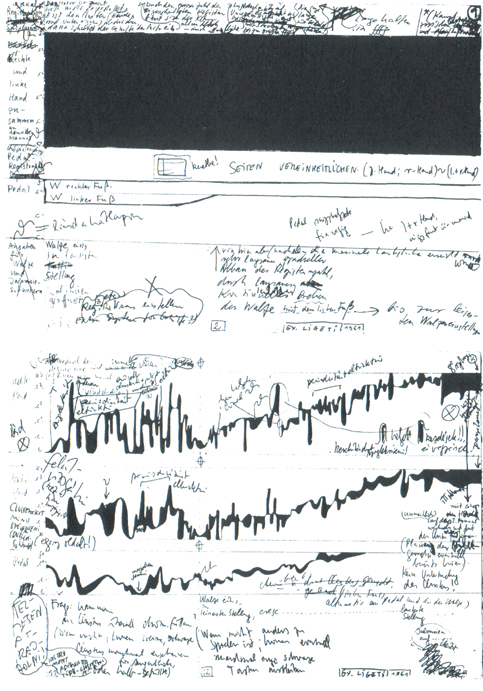 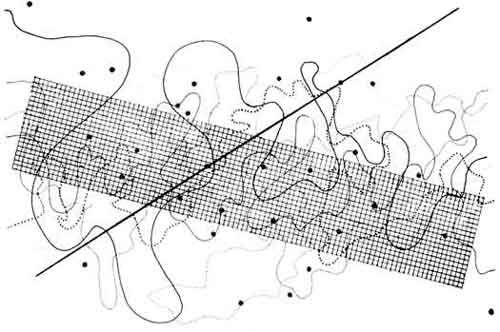 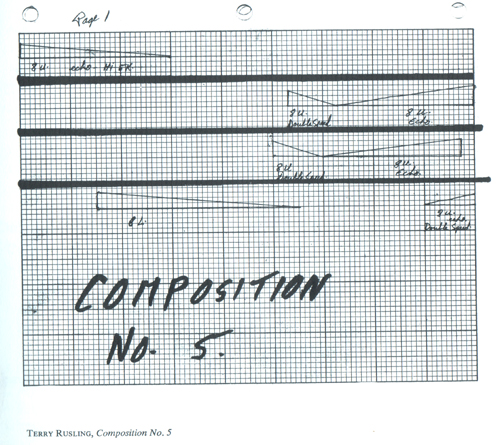 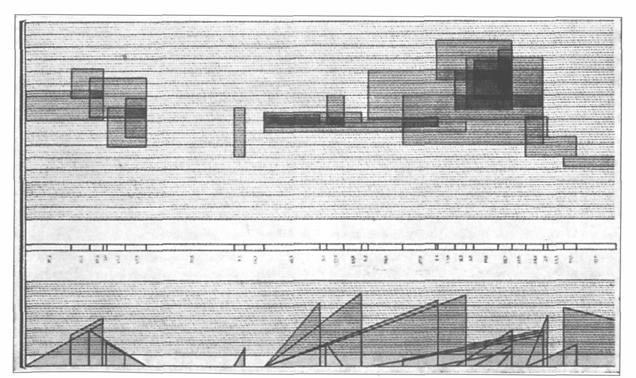 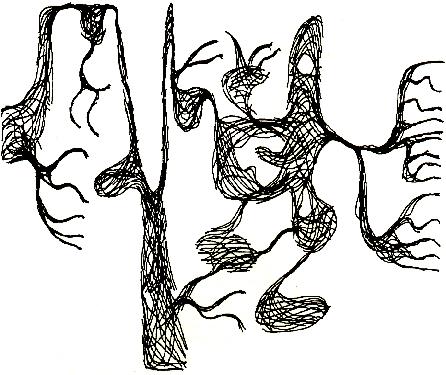 (This music is created using the UPIC which makes sound based on drawings that Xenakis made).