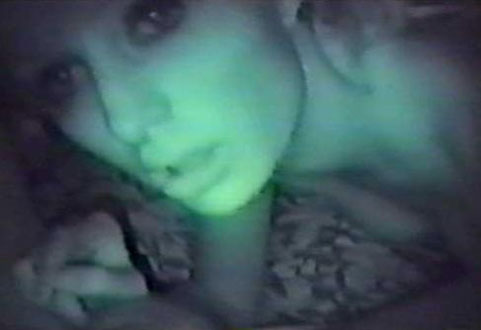 “It was like the Discovery Channel – her eyes were gleaming and she looked like a nocturnal marsupial, or a sexual emu.”
– Justin Long about the Paris Hilton sextape (the night vision – or “Paris Hilton vision” – one)

A few more thoughts in the context of a little program I’m chewing on, titled ‘Night Vision’. I recently stumbled on this piece by Graham Gussin, ‘Dark Light Piece (Night of the Living Dead)’, for which he used a piece of technology that measures the luminosity in each frame of Romero’s ‘Night of the Living Dead ‘(1968). “The film becomes abstracted, translating the action, figures and narrative into a strange landscape of green material”. Like the thermic camera, used by Philippe Grandrieux in ‘La Nouvelle Vie’ (see previous post) the technology Gussin used uncovers what Akira Mizuta Lippit describes as a “secret visuality” – just like the X-ray photography, “a mysterious ray a figure for the body of a new form of light that yielded a new visibility, a modern form of light and its transmission that permeated the twentieth century.” X-rays not only unveiled the hidden structures behind the living skin, but also drew attention to the fact that the light waves which render us capable of seeing are but a small part of the spectrum of existing light. These two revelations are both encapsulated in the double meaning of the word “invisible” – that which can’t be seen because it is hidden, and that which can’t be seen because it exists outside of the domain of human perception (read Jasper Sharp’s review of Lippit’s book ‘Atomic Light (Shadow Optics)’).

New technology influences not just our perception but also our physical being. Jordan Crandell is one of the artists who deal with the new paradigms of seeing and being. His work ‘Heatseeking’ (1999-2000), for example, is a series of 7 films shot in the San Diego/Tijuana border region, centered around the problems created by the border situation and the surveillance methods used there, as well as the increasing militarization of the human gaze. “In ‘Heatseeking (Course Track)’ two golf players meet to tee off on the golf course at night. Alone in the darkness they play their game observed by a camera with night vision technology. In this strange scenery, the camera alternates between the tension-filled game between the two players and the golf course’s expanse. Camera shots of the golf players in this location alternate with shots from surveillance cameras and computer-controlled search programs which makes the two protagonists appear as if they are in the system’s target-finding zone. Quite unexpectedly, one of the players hits his opponent with his golf club – a fight ensues, they roll around on the ground while the camera attempts to follow them. Almost imperceptibly, aggression switches over into ambivalent eroticism. The video ends abruptly in a sequence of quick film cuts and breaks which looks as if the film has ripped. Crandall has perfected the use of a broad range of film methods in Heatseeking. With rapidly changing camera angles, B/W and color changes, and the use of various levels of media, the observer is confronted with a flood of images which he is hard put to process. The soundtrack heightens the surreality of the night-time golf course scene – in place of the expected swish of flying golf balls Crandall has used sound material from weapons in action, underlying the latent aggressive undertones” (Sabine Himmelsbach).

The military visualization images used by Crandall are those with which we are all familiar from the media coverage of modern wars. A prominent example is the Gulf War which was followed on television world-wide and whose images of military high-tech operations engraved themselves in the minds of viewers. Devices which were developed for military purposes have long since infiltrated the consumer market. Switching from normal image to infrared is now a common feature of video cameras and this is enjoying ever-greater popularity -it’s also a big thing in games, see image. The way we see is being altered by technical aids – these ways of generating images are increasingly defining our perception. Vilém Flusser wrote: “We see everything as if we were constantly looking through a camera.” Crandall himself speaks of “militarized images”. “Tracking, targeting and identifying formats begin to seep into the way we see, behave, and desire. They enter into the very structure of perception. The camera marks the place of battle.”

Crandall targets the power dynamics around contemporary moving images: “sites where body and senses are adjusted, oriented, ‘armed,’ and contoured within complex new formats of movement.” Modern technology constructs the body of the viewer anew. “There is a kind of mutation of images that occur in this landscape, in that images become part of processing systems, parts of apparatus that “see back” at us. It involves a kind of reversal of vision, displacing our location as privileged sites in the viewing exchange. We are seen, before we see. We are identified, before we identify. There are biometric systems, and other kinds of systems, which lock onto you, identify you through your behaviour patterns or biological characteristics. It is a kind of switching of positions, and this is a very important change to think about.”