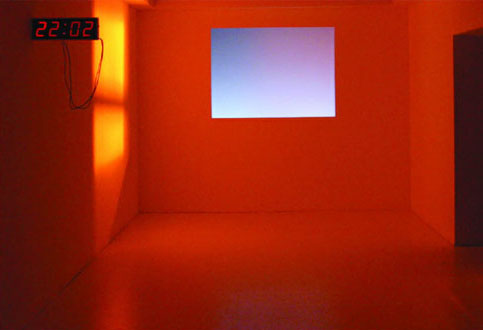 “All will be now. Dreams are too fast. You are the first. We are the last.
No sequence to follow. No fear of tomorrow. Kiss of neverness. Life of timelessness
We’ll break the speed of change. we’ll tame eternity.”
– The Pop group, ‘We Are Time’

The passing of time is something we feel intimately familiar with, and yet it continuously slips away from us. Centuries ago, St. Augustine already caught this tension in words: “What is Time? If nobody asks me, I know; but if I were desirous to explain it to one that should ask me, plainly I know not.” The invention of clock time provided a partial solution: time was rationalised, adjusted to the rhythms of growing industrialisation. This transformation – symbolically completed with the introduction of standard time and the division of the world into time zones – resonated deeply in our social and cultural lives. The experience-based understanding of time was replaced by a rigid, linear and numerical logic which has gradually become embedded in our subconscious. The arrival of ICT and globalisation has pierced this unilateral and troublesome relationship. Ironically enough, the dawning of the computer age –the main source of today’s acceleration – has allowed for new perspectives on the role and potential of time. This exhibition takes that openness as a starting point and presents a series of works which each in their own way strive for a particular time awareness. Different dimensions of time, both social and natural, objective and subjective, are unfolded, deformed and combined, in search for new forms of perception and imagination of time. 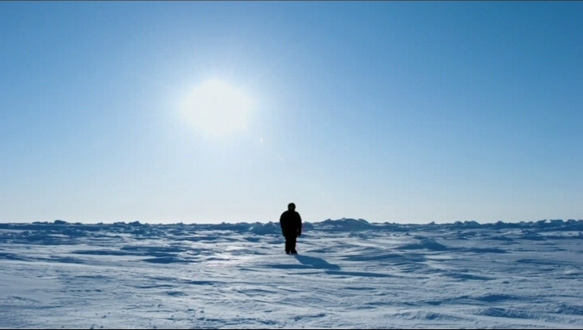 What happens when you take a day off, refusing to turn along with the world? One may think that such a day void of any motion and action has no consequences. Van der Werve took this question literally and left for the North Pole, where he spent 24 hours on the axis of the world. For one whole day he did not move along with Earth, but let the planet rotate around him. This almost Copernican inversion is both absurd and poetic, grotesque and moving. A tiny figure in the middle of a white icy plane, in a solitary fight against the tyranny of calendar calculations and the ticking of the clock.

Guido van der Werve (1977, Papendrecht, The Netherlands) constructs possible scenarios and imaginary realities where various geographies collide in order to generate momentary sensations of unusual, dream-like intensity. An accomplished classical pianist, composer, and chess player, he studied industrial design, archaeology, and Russian before focusing on fine art—first on painting, then performance work, and finally, film. He aims to create a visual and conceptual language that manifests a similar directness to the one that is typical in music. To date he has completed ten short film works that he describes as “possible scenarios of imaginary realities.” His work is regularly shown in international exhibitions and film festivals. In 2003 he received the René Coelho Award. 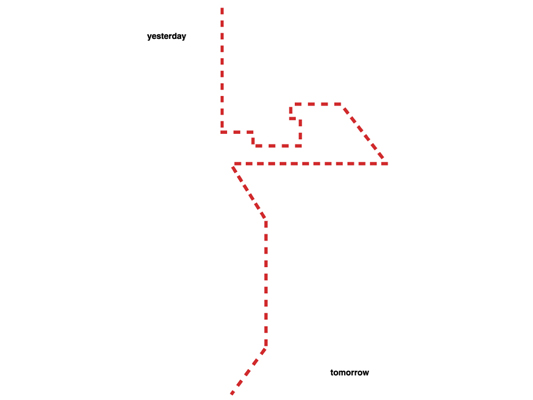 Julieta Aranda
You Had No Ninth of May!
Various materials. Dimensions variable
2008

The work of Julieta Aranda challenges conventional notions of temporal experience, proposing alternatives to the rigidity with which time is conceived and measured. The primary source of inspiration for this installation is the International Date Line (IDL), an imaginary line on the globe that separates two consecutive calendar days, establishing the boundary between today and tomorrow. Although the precise location of IDL is not fixed by any international agreement, it is commonly identified as being 180° longitude from the Greenwich Meridian. The line crosses the Kiribati archipelago in the South Pacific, causing an aberration in our assumed time-space continuum.

Julieta Aranda (1975, Mexico City) received her MFA in 2006 from Columbia University in New York and her BFA on filmmaking from the School of Visual Arts, New York in 2001. Within her multimedia oeuvre, she has frequently focused on the dissemination of information and the agency of the individual in contemporary society, reinventing existing systems of commerce and circulation to generate “alternative transactions of cultural capital”. Her work has been exhibited internationally in venues such as The Kitchen, New York; 10th Lyon Biennial; Solomon Guggenheim Museum, New York; Transmediale08, Berlin; 2nd Moscow Biennial, 2007; REDCAT, Los Angeles; and many others.

Thanks to Sebastian Schumacher

A light installation that compresses an entire day (24h) into 2.5 minutes: the experience of a day passing as if we were in a space rocket travelling away from Earth at a velocity of 299,782 (only 10 km/sec slower than the speed of light). A homage to Albert Einstein and his “twins paradox”, a thought experiment in special relativity involving a couple of twins that demonstrates that if one of them set out on a journey into space and back, they would no longer be the same age, and yet neither would be younger. The installation becomes an isolation cell where we let go of our conventional sense of time.

Vadim Fishkin (1965, Penza, USSR) has been living and working in Ljubljana since 1992. His work is principally concerned with science and its specific rules or phenomena, whether gravity (Kaplegraf_Zero_G, 2003), meteorology (Changing the Climate, 2004), astronomy (Am I a Star?, 2004), or botany (Self-Portrait, 1997). But the artist’s science is quite unrealistic, strange, and witty. It is not concerned with the seriousness of the scientific method or approach, but rather with the craziness that lies within a dangerous experiment. His work has been shown internationally in venues such as the 46th, 50th, and the 51st Venice Biennales, the 1st Valencia Biennial, the 1st Manifesta, the 3rd Istanbul Biennial, and the 8th Baltic Biennial, among others.

Thanks to Gregor Podnar Gallery

Three different rooms (living room, dining room and bedroom) with similar everyday furniture are shown on three screens. During the course of 26 minutes the objects in the rooms dissolve, leaving only the lighting and the bare space. Time seems to unfold at a pace that is both slow and infinitely fast: the gradual process of disappearance takes place at a slower rate than we normally associate with movement and destruction, but we also experience it as an acceleration of biological and geological time. We feel the natural force that inevitably leads towards the erosion and dissolution of all forms. What remains is a desolation beyond subjectivity.

Jonas Dahlberg (1970, Uddevalla, Sweden) often engages architectural precision and an investigative approach in his work, while always contemplating on the aesthetics of space, light and existence. Dahlberg builds meticulous architectural models of public environments or private interiors that he also employs as film sets for his videos – allowing the viewer to be at the same time inside and outside of the centre of the mise-en-scène. After studying architecture and art history in Lund and Gothenburg, Dahlberg received his MFA from Malmö Art Academy in 2000. His work has been shown at the Busan Biennial, South Korea; the Santa Monica Museum of Modern Art, California; Kunsthalle Wien; Art Basel; the 50th Venice Biennal; Centre pour l’image contemporaine, Geneva; among many others.

The most recent installation in Glenn Kaino’s ‘Time Machines’ series is a cinematographic triptych displaying the journey of three characters each travelling the distance of a quarter mile (=400 metres) in their own environment: jazz musician Olu Dara, beach volleyball player Sinjin Smith and Formula D racer Kenji Yamanaka. The sequences are synchronized so they all take the same time, in spite of their original speed. Every action is repeated several times, always at a different rhythm. The movement of each character is essentially bound to the performances of the other two, challenging our relationship to time, distance and speed.

Cofounder of Los Angeles’ artist-run Deep River Gallery, former Creative Director of Napster and creator of ueber.com, a MySpace alternative made for and by artists, Los Angeles-based artist Glenn Kaino (1970, LA, USA) has a multifaceted creative practice, characterised by playfulness and a penchant for meditating on political, pop-cultural and identity issues without being literal. He received his B.A. from the University of California, Irvine and his M.F.A. from the University of California, San Diego. Kaino’s work has been shown at the Asia Society, New York; Whitney Biennial at the Whitney Museum of American Art, New York; the Bronx Museum of the Arts; The Studio Museum, New York; and The Walker Art Center, Minneapolis.

A time-lapse film with images of the shifting sunlight is projected onto a small rotating screen attached to the hand of a clock. The shaft of sunlight changes its shape as a result of Earth and screen revolving. It creates an unexpected dynamics between the abstract, socially constructed clock-time, the natural cycle of Earth’s rotation and the temporality of film medium, resulting in a meditation on the complexity of our experience of time.

Guy Sherwin (1948, London, England) pushes the limits of cinema with his films, installation works and performances, in which he explores film’s fundamental properties: light and time. After studying painting at the Chelsea School of Art in the late 1960’s, Sherwin taught printing and processing at the London Film-Makers’ Co-op during the mid-70s, at the heyday of the British Structural Film Movement. He now teaches at Middlesex University and University of Wolverhampton, and collaborates on expanded cinema performances with his partner, Singaporean film and sound artist Lynn Loo. His films have been widely exhibited in England and abroad. Solo shows include San Francisco Cinematheque, LUX London, International Film Festival Rotterdam, Bozar Brussels and Image Forum Tokyo. 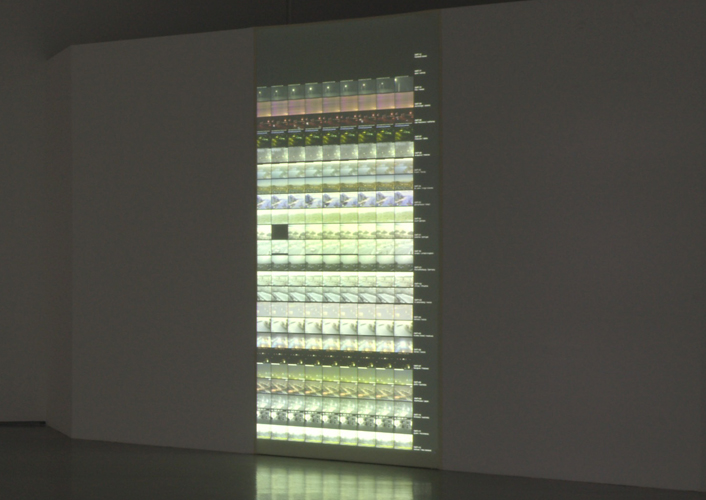 A narrative clock made out of images extracted in real time from webcams found in every time zone around the world. The result is a constantly changing array of images that read like a series of movie storyboards, but also as an idiosyncratic electronic sundial. This installation pinpoints the tension between local time and the Internet’s global time regime. In spite of the attempts to introduce an online standard time, natural and cultural time differences cannot be ignored.

Jon Thomson (1969, London, England) and Alison Craighead (1971, Aberdeen, Scotland) are London-based visual artists, who work with video, sound and the internet. Much of their work to date explores how technology changes the way we perceive the world around us. They use live data to make artworks, including “template cinema online artworks” and gallery installations, where networked movies are created in real time from online material such as remote-user security web cams, audio feeds and chat room text transcripts. Their work has been shown at Tate Britain; San Francisco Museum of Modern Art SFMOMA; Laboral, Gijon, Spain; Zentrum Kunst Media ZKM, Karlsruhe, Germany; The New Museum, New York; Mejanlabs, Stockholm; Neuberger Museum of Art at Purchase, New York. 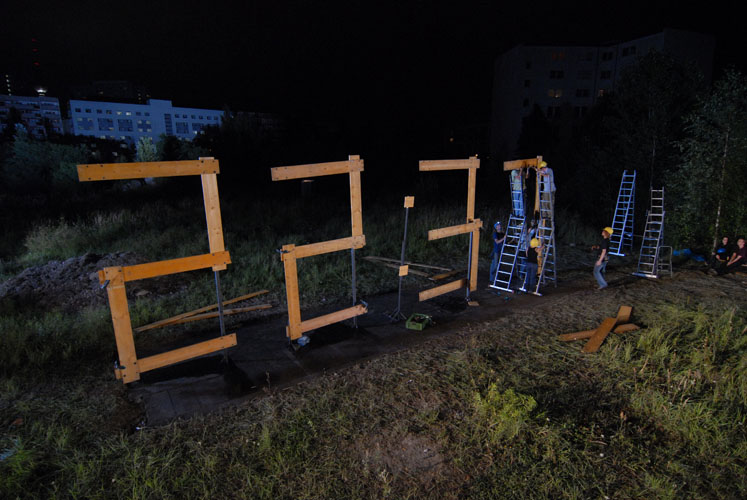 The recording of a performance in which 70 workers assemble and reassemble a 4 x 12 m wooden replica of a “digital” clock that displays the “real” time: a task that involves 1611 changes over a 24-hour period. This installation offers an ironic comment on the tension between labour, technology and temporality. What better way to waste time than by marking its passage? 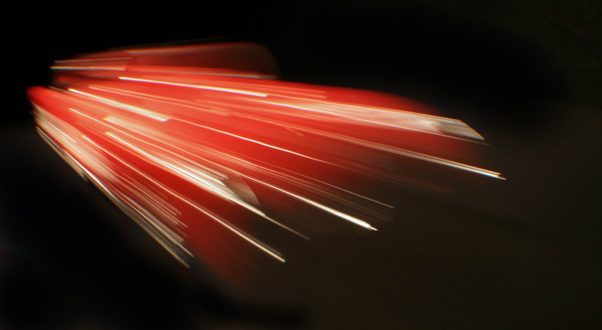 A research on the representation of four dimensional spacetime – described by Albert Einstein in his theory of special relativity – led to the making of this audiovisual sculpture of speed. Using a scale model of a sports car and a dolly synchronised to the shutter of the camera, Fleisch has produced a capturing visualisation of the phenomenon of speed, with playful references to Paul Virilio and Jeremy Clarkson.