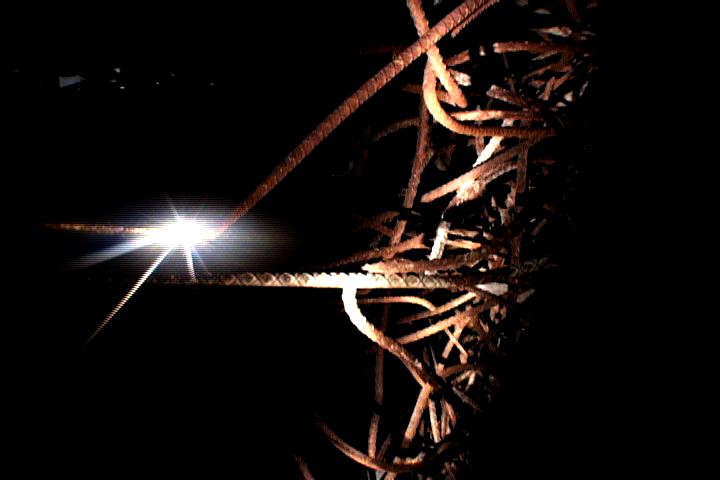 As I mentioned before I’m doing a bit of research on the representation/vizualisation of the night, and the relation with technology and perception (for a programma that might be presented as part of the next edition of the Courtisane Festival in Gent in March 2010). Some time ago I bumped into some really interesting new work by Peter Rose, of whom I only knew earlier work like ‘Analogies: studies in the movement of time’ (1977). Recently he has been experimenting with a tactic he calls “transfalumination: “I venture at night into the marginal geographies of the city and perform peculiar ceremonies with light, hoping to bring back images that appeal to some deep sense of the mysterious”.

“I’ve been interested in finding a way to somehow speak with light and to find thereby a luminal relationship with the world that is both incantatory and sensual. To this end I’ve designed an array of portable lighting instruments that project sheets of light, rather than beams of light, and I’ve been experimenting with these on a variety of scales ranging from blades of grass to fairly large landscapes. None of the images are made with any sort of animated strategy- while there is, occasionally, superimposition, and while some of the images have been slowed down, all are made in real time, in real space. I understand this all as arising from the confluence of two grand traditions in the avant-garde. There is the work that is concerned with the unadulterated, fundamental properties of light (Sharits, Kubelka, McCall, Recoder, Brakhage, the later Jacobs,et al.) And then there is a somewhat contrapuntal cabal that is more invested in ceremony, shamanic ritual, transformation, the unconscious, a performative sense of the medium that is far more narrative and lyrical; I’m thinking of Anger, Broughton, Deren, Brakhage, early Gerson, et al.)”

Here are two wonderful works from that series: Journey to Q’xtlan (2009) and Studies in Transfalumination (2008).

Journey to Q’xtlan from peter rose on Vimeo.

Studies in Transfalumination from peter rose on Vimeo.