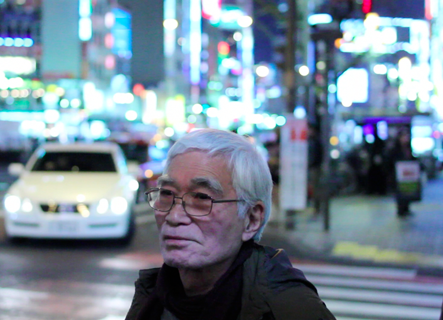 “Shooting a gun or shooting with a camera, it doesn’t make a difference to me”
— Masao Adachi

“The revolution has been continuously my theme. Main subject” says Masao Adachi (born 1939). “People Said: Revolutionary Cinema. I said: No. It’s Cinema for Revolution.” Of all the filmmakers that would be inspired by the spirit of resistance and utopia of the 1960’s and 1970’s, Adachi is without a doubt the most radically and perseveringly militant. Armed with a camera or with a gun: it made no difference to him. To him, both weapons served as possible intervention tools in the fight against political and social oppression. It is not accidental that his first films were made under the auspices of the Japanese student movements that were born after WWII against what were regarded as antidemocratic and neo-colonial policies (particularly in relation to the USA). With his surrealistically tinted and politically provoking experiments he inscribed himself rapidly as part of the so called “new wave” currents that shook Japanese culture of the time. In that context he collaborated with the likes of Nagisa Oshima and especially Kôji Wakamatsu, with whom he would inject the erotically charged “pink cinema” genre with a lively dose of anarchism. Resulting in controversial works such as Seiyûgi (Sex Game, 1968) and Jogakusei gerira (Female Student Guerillas, 1969), these experiences taught Adachi the basic rules of guerrilla-style filmmaking: fast and cheap. In 1971, after visiting the Cannes Film Festival, Wakamatsu and Adachi travelled to Lebanon, where they would film Sekigun-PFLP: Sekai Senso Sengen (The Red Army / PFLP: Declaration of World War), a propaganda film in support of the Arab fight against Israeli occupation. In 1974 Adachi returned to Pastine, with the idea of making a second film. He would end up staying 26 years, at the service of the Palestinian cause. In 1997, under the pressure of the Japanese authorities, he was incarcerated in Beirut. He was extradited to his country three years later, where he remained in prison for two more years. Once free, Adachi gave the account of his experiences in a series of autobiographical publications as well as a new film – his first in more than thirty years : Yûheisha – Terorisuto (Prisoner/Terrorist, 2006). Today Adachi’s activist thought resonates with more force than ever, as show the number of screenings and retrospectives that have been organised around the world in recent years. Perhaps the most beautiful homage is the one that French filmmaker Philippe Grandrieux pays to his work in a recent cinematographic portrait.

“A to and fro between politics and cinema, between Trotskym and Surrealism, between armed struggle and screenplays, between Palestine, Lebanon and Japan, between the day-before-yesterday and today, between beauty and resolve, between the art of eating and that of being a father, such is the risky and precise life of Masao Adachi, the monsieur with the white hair glimpsed in his delusions. And this is just how Philippe Grandrieux, faithful to his way of doing things, decided to suggest his portrait, with no a priori, without interrupting speech, filming him and listening to his words without at first understanding them, framing him in a tight close-up that is sometimes underexposed, other times overexposed, to better abandon him later for: cherry trees in blossom, the streets of Tokyo swarming with cars and passersby, familiar objects and lactescent celling light. And from time to time, Grandrieux lets speak a few shots from his earlier films, from where suddenly crops up the phrase, Genet-like, given in the title: a paradoxical program that hesitates to connect one shore to the other”. (Jean-Pierre Rehm) This is the first part of the film series “Il se peut que la beauté ait renforcé notre résolution”, dedicated to filmmakers who in the course of the 20th century devoted their lives and work to resistance and emancipation. 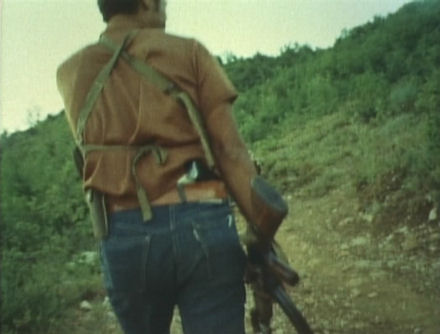 “In 1971, Adachi and Wakamatsu were invited to Cannes Film Festival. On the way back they went to Beirut, and while they were there shot Sekigun PFLP – Sekai Senso Sengen (The Red Army/PFLP: Declaration of World War) a film that showed the ‘everyday life’ of Arab guerillas, and transformed a ‘news documentary’ into a radical text for a world revolution. Rejecting the existing system of film exhibition and declaring the screening itself as a political act, the ‘Red Bus’ mobile projection unit was formed and they hit the road, showing the film in Palestine and Europe. This film can be seen as the key Japanese film of that era, as it completely epitomised the spirit of the radical filmmaking movement. It was also a personal turning point for one of its makers: Adachi left Japan in 1974, in order to join the Palestinian revolution as a Japanese Red Army soldier. “ (Go Hirasawa)