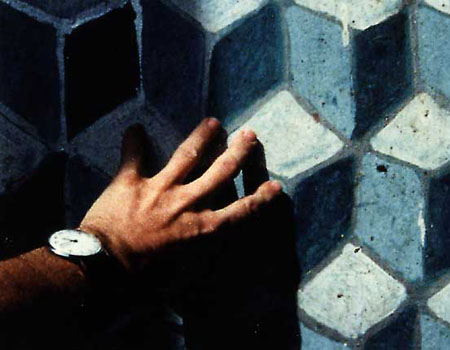 We tend to overlook the work of this gliding Dutchman, one of the greatest practitioners of contemporary “documental-fiction”*. The eye of this filmmaker without borders is like a scalpel.

To start off, an answer to the question: who is Johan van der Keuken? He’s Dutch, born in Amsterdam, forty-four years old. An excellent “documentor” (a word I propose to use indefinitely instead of “documentarist”*); The Way South comes out just in time. The films of Van der Keuken were on their way to be more known than seen, more reputed than distributed. Thanks to Forum-distribution the scandal is avoided: the Paris audience gets to see this 28th film of the persistent Dutchman. His seventh long film. His best.

When a documentor comes from the North and has a bona fide passport and conscience, a camera and a good eye behind it, where does he go? Towards the South, of course. Matter of initiation (Brueghel, Van Gogh, Ivens). Since quite some time now, Van der Keuken has been heading “towards the south”. To Paris where he, at the end of the 1950’s, studied cinema (at Idehec) and practiced his first craft (photography). Later, between 1972 and 1974, he composed, bit by bit, an ambitious “North-South” triptych (Diary, The White Castle, The New Ice-age). It was a matter of finding a form of cinema that responded to the third-world sensibility of the time. Imposed figures: the effects on the South of the politics decided on in the North, unequal exchange, ecological disaster. Van der Keuken takes them very seriously. We see him everywhere: Cameroon, Peru, USA, Spain, Morocco. This eye of a lynx has seen countries, this attentive ear has been around the globe, this nose has bumped into the real.

There is (without a doubt) a Batavian “school” of documentors, of which Van der Keuken today and Ivens before him are the most beautiful assets. But contrary to the old Ivens, Van der Keuken hasn’t put his knowledge of filming in service of the world’s most powerful communist states. He has entered the stage later, at a moment when communism has disappointed us (a bit, a lot, madly) and when even the idea of “third world” has gone rancid. Today, the filmmaker who wants to commit his work has to pass the mission to himself. End of the militant mission, arrival of the “filmmaker without borders”. In 1981, filming “towards the South” simply means to head towards the sun and towards the misery, there where it feels right to witness. It’s filming more poverty than one knows. And, “somehow”, being fond of it.

The South, as the reader must have guessed, is a state. A geopolitical state and a physical state. The work of Van der Keuken could be subtitled “the misery caused by the global capitalist system and the infirmity it ensues for the human body.” It’s with the tenderness of a scalpel that the eye of the filmmaker captures what doesn’t work between someone and one’s immediate environment. Van der Keuken is a champion of discomfort, when vital space is lacking. Impeded, twisted, disabled bodies, bad in their skin, bad in their language. His most astonishing film is still Herman Slobbe, Blind Child (1964) in which morality is born out of obscenity and vice versa. The relations between North and South start there: all that is in front of the camera is in the South, the camera is always in the North. The camera is a compass.

But going to the South means loosing the North. The Way South is Van der Keuken’s most simple and direct film to date. It’s the account of a journey, some pages torn from a log book, a travelogue. The filmmaker leaves from Amsterdam and, two hours and 20 minutes later, looses himself completely in the Caïro crowd. He passes by Paris, the Drôme, Rome, Calabria. Those who he crosses paths with and respond to his questions have nothing in common except for this: they have accepted their environment, they don’t want anything else, they want to stay where they are.

In Amsterdam, youngsters get organized to squatter, go head to head with the police and the housing crisis. In Paris, in the neighborhood of Goutte d’or, Ali, who’s abated by an occupational injury, lives in a room surrounded by his medicines and correspondence courses. In the Drôme, some old lavendiers know that lavender doesn’t sell well, but they abide. In Rome, an old Eritrean woman recounts her life, which is quite something. In Calabria, a stubborn priest fights the rural exodus, by setting up a sewing atelier. And then, we arrive in the South. Terminus: Caïro. The filmmaker gets off. The real film begins.

Because I’ve failed to mention something: Van der Keuken is an extraordinary cameraman. One of the greatest. He pushes the passion for the frame towards unsuspected paroxysms. I’ve said it well: passion. Agony and ecstasy. Cinema, for him, is twenty-four frames a second. The remorse of a photographer? Between film and cliché, image slipping and image freezing*: a very particular, a bit asphyxiating, practice of cinema.

Thus in Egypt, nothing much comes out of the interviews. One lies easily to the man with the camera. Aggrieved, he heads off to the road and starts filming the circulation. A packed train, a crowd in pajamas, carts out of a sword-and-sandal film, cars threading slowly, astonished children, deranged animals, fine dust and, in between, faster than them, the eye of the filmmaker. Images without a stake, bath of images, images that have – finally – lost the North. Fantastic.

The culture of Van der Keuken is photography and jazz. He once made a nice film on Ben Webster (Big Ben) and the musician he usually works with is none other than Willem Breuker. He films like Charlie Parker or Bud Powell play: all the notes at a breathtaking speed. Lost in the Caïro crowd, Van der Keuken “plays cinema” like one plays the saxophone; he plays all the frames, very fast. Pan shots as the introduction of the theme, nervous deframings as riffs, reframings as chords, etc. It doesn’t happen often that one can “play” cinema like this, because of the awful way television uses the optical tracking shot. The soloist must be in good shape. Matter of gymnastics.

Some years ago, Van der Keuken told me something that struck me. “Having to carry the camera obliges me to be in shape. I have to find a good physical rhythm. The camera is heavy, at least for me. It weighs 11,5 kilos, with a battery of 4,5 kilos. In total 16 kilos. It’s a weight that counts and that implies that the movements of the machine can’t take place candidly, every movement counts, weighs.”

The great cameramen know better than anyone else how to play tricks on others. In order not to get outrun by their unscrupulous love of filming, they often invent a guard rail, a play rule, each in their own way. I love it that for Van der Keuken, morality goes through physical fatigue. It’s a matter of discrepancy between the time of speech and the time of a look. Talking takes time, looking doesn’t. There’s something diabolical in this discrepancy.

Imagine our documentor of the North behind his camera which is a bit too heavy, asking questions and filming the responses and at the same time, behind the viewfinder, imagine this organ that is excited by every little thing, distracted by everything, exuding frames like one breathes, that goes too fast, capturing more things than aspired; involuntary comedy, emptiness, easy fetishism, scandalous beauty: the immoral eye that, literally, doesn’t give a damn*.

The Way South will be shown at KASKcinema on May 3th 2012.

translator’s notes
* documental fiction = “documensonge”, a word play with “document(aire)” and “mensonge” (lie, artifice)
* documentor = “documenteur”, documentarist = “documentariste”
* image freezing = “arrêt sur l’image”, a pun on “arrêt sur image” (the French term for “freeze frame”) but means much more than this. See also this translation.
* the immoral eye that, literally, doesn’t give a damn = “l’oeil immoral qui, à la lettre, s’en fout”. I’m sure there are other, perhaps better ways to translate this.