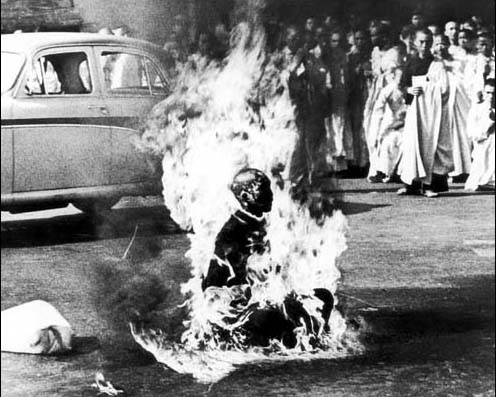 By Serge Daney and Serge Toubiana.

1. A “mark image” first of all makes sense in advertising. A product that doesn’t associate itself with an image is a product that sells badly or not at all. The absence of the mark itself has to be marked out in order to be seen (“here’s washing powder x”). We have always suspected that the publicitary cinema wasn’t the unworthy margin of cinema, but its truth. The dominant cinema, as they say, is most of all aimed at the management of “mark images”. It’s the one of the sponsor (financier), the benchmark (taken for real) of the good cause (to serve once more) or the parent company (“you can find everything in store x”). The dominant cinema only makes publicity for its off-screen.

2. A “mark image” makes (more and more) sense in politics. A minister who doesn’t associate him or herself with an image is a hopeless scandal (it’s the function of polls to watch over it). A cause without images isn’t only ignored, it’s lost. The big scandal, in the eyes of the Europeans, is not that there might be massacres in Cambodia, it’s the audacity of a small country deemed cynical for not feeding its images to the chains that were set up to cancel them out in the first place. And in these chains, the ones of the globalizing media, the watchword is always the one used by the first policeman arriving on the scene: circulate! The Cambodian silence echoes another scandal: Munich 72, the Palestinians taking advantage of the existence of a global stage to make something heard. A frail sound, judging by the consensus (tacit, without images), that risks accompanying the elimination of the Palestinians and their cause (today, 10 July 1976, new attack on the camp of Tell-el Zaatar, without images).

3. The mark is “the sign used to recognize something, to distinguish it from something else, to identify a function”, but it’s also “the trace that a bruise or a blow leaves on the body”. The image marks (it has a power and force in and of itself) but is marked in return (it bears traces of forces, of power that wants to make use of it). Its future as an image? Becoming, in the dreadful circulation of signs, an abutment, an emblem, a signature, a stimulus. Solidified power, a node of domination. Its function? Taking the place of a link in a chain, preventing all other images from being seen.

4. Taking images, arranging them in chains, reducing them, is, as we know, the function of the media. But perhaps we still have naive ideas about that. The first observation made by those who look at, for example, press photographs, is that those pictures are – paradoxically – scarce, timidly or underused. It’s one thing to observe that the power (whatever it is) is eager to install, to strengthen its monopoly on images (taking, circulating, archiving them), it’s another to conclude that it knows how to subject them, manipulate them to its benefit, making them speak for it. Images are – in contrast to an idea that is quite widespread on the Left – for the moment at least, rather frightening the whole world. And if “the audiovisual” (a rather shaky and vague category, coming from above) takes part in the mechanisms of power, it’s rather by making us, every day more and more, blind (only capable of ruminating on what we have seen before) and deaf (for all what is not on the level of the automatic answering machine).

5. What is true of state power, is as true of the parties that have their heart set on the management of that state (and its cultural and information apparatus). At a time when the monopoly of imaging the history of the “people of France” and its social struggles comes back to the filmmakers situated in the Leftist union movement, it seems important to examine under which conditions, on which terrain, this monopoly could play out. It was therefore necessary to bring out the dominant traditional trait of French cinema, which is amnesic and without any genealogical dimension. This is what we have done with Jacques Rancière.

6. This interview derives in the wake of the one we have done in 1974 with Michel Foucault*. At that time, the important event (that we perhaps weren’t always able to see) was the resurgence of what we can call a certain desire for history. This desire expressed itself in two ways, more adherent than we guessed: on one hand, through “retro”, a real curiosity (and its inevitable recuperation by the right) that disrespectfully countered all commemorative and fossilized thinking; on the other, through the reclaiming of a certain “popular memory”, a pious exorcism.

Why Jacques Rancière? Because reading Althusser’s Lesson, more than a year ago, helped us to distance ourselves from a certain fossilized (and sterile) dialectics in which classes, instances and ideologies could only abide and stand by like faience dogs. This book allowed us on the contrary to better understand the game of ideologies, the system of their interleaving and their opposition. A work that is continued by J. Rancière in the magazine ‘Les Revoltes Logiques’.

This interview has a history of its own. Different strata come together. We had to start off with the criticism of Althusserian positions, the post-leftist philosophy, the Glucksmann current etc. And cinema? Unaware of the relation Rancière has developed with cinema, we have been given a few films to see, amongst them some that still haunt us: Milestones, Ici et Ailleurs, Numéro Deux, Un Simple Exemple, etc.

Translated by Stoffel Debuysere (Please contact me if you can improve the translation). A translation of the interview with Jacques Rancière mentioned here (“The fraternal image”) will be published in a later post.