Among the presents offered to the public on the occasion of the end of year festivities, it is no surprise to find some of Lubitsch’s masterpieces, as his cinema is usually associated with a promise of happiness. But what does this happiness consist of exactly? And why do we now consider it as a paradise lost of cinema, of which the door has closed on us? Perhaps a brief sequence from Trouble in Paradise might help us to understand.

The episode occurs at the moment when the billionaire Mariette Collet receives those who pretend to return the bag she lost at the opera. From the crowd of small people gathered in the hallway in hope of compensation suddenly appears a tall beanpole with black eyes and a bushy mop of hair. He is not there to return a bag. He’s there to stigmatize, citing a quote by Trotsky, this woman with her bag covered with priceless diamonds. An other intruder opens the door: it’s Gaston Monescu alias Monsieur LeVal, the swindler who’s returning the bag he has stolen himself, to cash the promised 20.000 francs. In a few words of Russian, he makes clear to the troublemaker that he is annoying the lady and it would be in his interest to leave.

It might appear as obvious: this frenzied trotskist is not in his place in the lounge of the exquisite and wealthy Madame Collet and, after having amused the audience for a few seconds, he has to disappear for the great game of swindle and seduction to start. This exit is not only in the interest of the character, but also in the interest of art. Art lives off appearances and Lubitsch’s art notably so. Kant already demonstrated that, in order to esthetically enjoy the forms of a palace, one has to suspend all moral considerations about the vanity of the idlers living there, exploiting the work of the poor. In order to enjoy the marvelous ambiguity of the game between the swindler in love and his cynical victim, one has to close the door on all considerations about the origin of the money paying for Madame Collet’s follies and arousing her seducer’s greed.

But there is something more singular in this sequence. Why does Gaston, who doesn’t know the fanatic and hasn’t heard his diatribe, address him in Russian? This linguistic one-on-one transforms the expulsion of the intruder into a secret connivance. As if, more than Gaston, it was Lubitsch addressing the champion of the class struggle, that is to say to the one saying the truth about social appearances, to answer him something like this: “I know what you have to say about my characters. I can say it as well. And moreover I will do it my way, showing the spectacle of this world where there are only thieves, except for this innocent billionaire who doesn’t have to steal from anyone in particular because the system organizes the theft for her. But this way precisely excludes yours, which denounces the vanity of this world of appearances in the name of the outside reality, of the truth of exploitation supporting this appearance. One of us is too much here. And since I’m at home here, in the cinema, it’s up to you to leave.”

So the alternative is truly a connivance. Throwing the Marxist – the one who says the truth about appearances – out the door, means stationing him as guard of that door. Against who does he guard it? The answer is clear: against the crowd of pretenders gathered in the hallway, against the ordinary representatives of social comedy, those “Messieurs Dames” Mallarmé was talking about, always ready to offer their goods and their person, transforming the screen or the scene into mirrors where they love to recognize their features and manners. The guard of the true has to throw out this crowd of pretenders so that the magician of appearances can establish his own logic, killing two birds with one stone using the great economic law of equivalence. On one hand, the true and the false cannot be distinguished at all anymore. Every word and every gesture of the calculating crook are at the same time gestures and words of love and every credulity of the victim is a cynical complicity of the one who can buy everything. One the other hand, the game of equivalence avows its truth: in the icy waters of egoist calculation, all ambiguity of loving seduction comes down, in the last instance, to the indifference of the monetary equivalent. The art of the illusionist does not play against the militant science. They share roles. The force of the game of appearances in the house of Collet is equal to the force of the truth – of the class struggle – standing behind the door.

This solidarity allows, by contrast, to shed some light on a few actual problems of our cinema. When the class struggle is no longer behind the door, when the end of history and politics is proclaimed, it’s the crowd of pretenders passing through the door. It’s the social comedy, the games of family and society of resemblance invading the screen. So the actual facts of social violence seem to float in mid air, without finding plausible bodies to embody them on the screen. And, at the same time, it’s the art of appearances that appears as a paradise never lost. This is evidenced by two recent films. In Selon Mathieu (Xavier Beauvois), the scenario of class violence seems to float above the characters like an abstraction rendering all particular embodiment superfluous. And yet the story of the father struck to death by his dismissal and the words of the characters tell us a story that we recognize as real: the savage reign of the market, lives broken by dismissals which, by contrast, increase the share prices of the enterprise etc. But when the truth is no longer behind the door, when it is known to everyone, similar to what is repeated every half hour in news reports, there is no particular voice left to embody it. Bodies are thus chasing words that are floating and can’t be retained. In front of the vain shouts of Matthieu’s voice we share the exasperation of his brother. All the strong shots of the film are mute: the manager passing in front of the father, smoking against the rules, without noticing him; The trail of blood in the middle of the blocked crossroads, and the police taking away this body hidden under a blanket, that of the father who died of the injustice he suffered; the meticulous gestures of the son smoothing the black marble tombstone like one cleans windowpanes; the mute look of Matthieu at the moment of the break-up with the manager’s wife, seduced by vengeance; the final rodeo straightening out the quarrel between the revolting son and the submissive son. It is mutism having the last word. And with it the sea, the sky and the music. 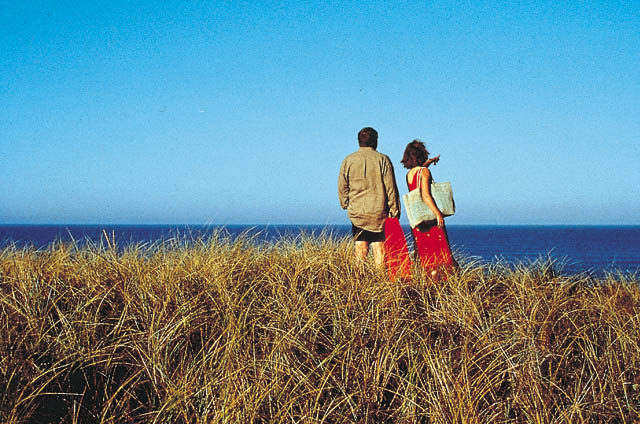 These also have the last word in Sous le Sable (François Ozon). Certainly the film doesn’t care about social issues. What it cares about, by contrast, are the shadows of art. And if the reference to l’Avventura obviously imposes itself on this reversed scenario of a disappearance, it is also the inconscient charm of the conjurer Gaston Monescu which is evoked in front of this seducer figure promoting something like a deodorant for all those aspiring success with women: to seduce a woman, it is necessary and sufficient to show that one desires her. But as the seduced tells him, he’s not convincing enough. Less in any case than this corpulent and taciturn bear of a husband who has used the supreme weapon of seduction: disappearing without a trace, vanishing in the great emptiness of the ocean, to reappear as an accomplice shadow. The only chance the needy seducer has left is to appear in the final episode on the beach as the figure of this non identifiable silhouette who is for the woman the silhouette of the desirable departed, for us the seduction of the cinematographic shadow, perhaps vanished along with the truth that guarded it. The film is like the fable of a contemporary cinema bereft of guardians, desperately striving to regain, short of evaded bodies and mute faces, the paradise lost of appearances. 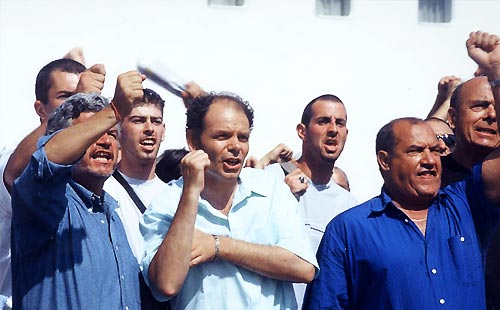 The sea, the sky and grand music also open and close La Ville est Tranquille (Robert Guédiguian). And without a doubt this film is the one which evidences the most the dialectical game of social truth and cinematographic appearance. More than the others, Guédiguian has made the class struggle and its effacement the subject of his films. And doing so he has exposed himself to the major reproach: that of confounding the art of cinematographic shadows with ideological sermon and cluttering up the words of politics with bodies that have nothing to do with it. This is how he made the little operetta world of Marius et Jeannette into a cross-section of a people à l’ancienne, even including, as one might expect, its contradiction among the people: a partisan of Front National. La Ville est Tranquille seems to be constructed as a response to this challenge: to make cinema with the present state of the social, making plausible in the singularity of filmed bodies this state that doesn’t stop diluting itself in the consensual words declaring the end of all great oppositions. Mute living bodies and dead bodies covered with sheets jostle exemplarily in the film. But rather than undergoing the division of words and bodies, the filmmaker has chosen to construct it, structuring the film according to a system of two great gaps, simultaneously affecting the visible of bodies and the words stating the state of the world. It’s first of all the great gap between the long panoramic shots of the town, accompanied by the hit songs of reconciliation music (Mozart’s Turkish March, Bach’s Joy of Man’s Desiring, etc.) and the small dramas, putting in play microscopic gestures carried out by fragmented bodies for other fragmented bodies. Think of the viewfinder of the hit man’s gun, but most of all, of course, of these close-ups in which the hands of the mother, on the table where the baby’s diapers are changed, prepares the drugs for the moaning body of her son whose head and arms, covered with needle traces, barely emanate from a mountain of red mohair hair, and of the hesitation of these hands at the moment when a deadly supplement is added, draining the last “thank you” from this almost mute body. At the same time, a second gap breaks in two the pervading discourse at the end of the class struggle, of history, of every utopia. It is split in two extremes: on one hand, the endless discourse of the boasting socialist urbanist – another derisory seducer figure – or of the militant returning from the primitive forests of life; on the other hand, impeded by the radical silence of the hit man, the movement slowing down and rarefying the words of the old syndicalist docker who became a taxi driver. When he starts, as an attempt to cheer up the humiliated mother, intoning the verses of the Internationale in all languages, something recalls, along with the pranks of Lubitschian bodies, the old alliance between the guardians of the true and the magicians of appearance. These moments of happiness quickly avow themselves as paid at the highest price. And when the colors of the town dissipate in the white finale, it’s the Turkish March proposing in their place a cheerfulness which is perhaps a bit too mechanic.

translator’s notes
* “La Porte du Paradis” is – not coincidentally, I presume – also the French title of a film by Michael Cimino: Heaven’s Gate (1980)