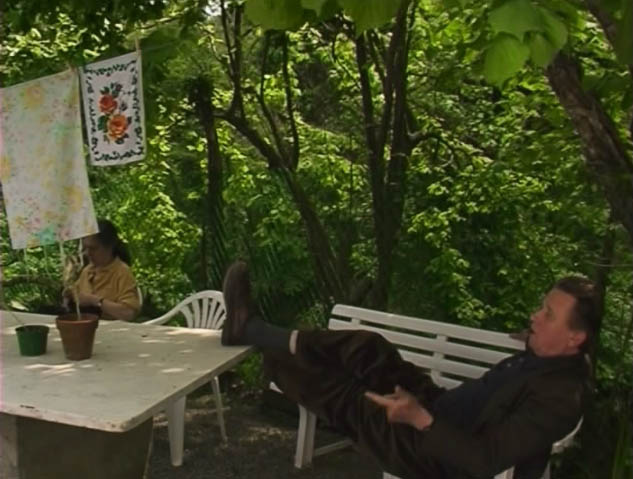 Interview by Philippe Azoury, published as ‘Costa et Les Straub en libertÃ©‘ in LibÃ©ration, 19 September 2001, at the occasion of the release of ‘Operai, contadini’ and ‘In Vanda’s Room’

JMS: I’ve been talking too much. An interview is dangerous: one always falls back on the clichÃ©s that the work on the film really wants to destroy. Bringing us together is also a bad idea: our two films are not alike, although they seem to have some family traits in common. Pedro has spent two years in Vanda’s neighborhood, we have always worked with this patience. What our films have in common is their luxury. The only difficulty they present is the absolute liberty they leave. People are afraid of this liberty.

PC: I have made the film for the people of the neighborhood where I filmed.

The little girls of the province

PC: Vanda is shown in only one cinema. It’s charity, really: it’s not even advertised. Paula Branco (distributor of the film) didn’t deem it necessary. If people are interested in seeing Vanda, they have to do it soon. How many days, not even weeks, can the film hold out?

JMS: In school, I knew a Jesuit who always said: “we need little girls like you in the province”, which meant “everything goes well over there, but not here.” The only liberty we have when making films like that, is that we have been demoted, since thirty years, to beggardom. We are not the only ones: Pedro also doesn’t delegate when making his film. Make a film freely means organising everything oneself. Every film is a political film, if not it’s worth nothing, it’s just put in the hands of professionals. We only try to do the work of artisans freely, correctly, morally and esthetically irreprochable.

PC: the cinema of DaniÃ¨le and Jean-Marie has formed me. I was into punk-rock when I discovered their films. And, for me, it was the same thing. I would like that the people who have a false, terrorizing, idea of their films, could imagine the very simple, very beautiful things I have learned from them: a minimum of images is enough for there to be cinema. Today, being close to them means to continue to be able to make films in a simple manner, while respecting the things I film.

JMS: Vanda has dazzled me for at least one hour: here is someone of his age making shots not unworthy of Fritz Lang or Mizoguchi. The film takes place inside, but when, in flashes, we find ourselves outside, we immediately imagine ourselves in films of Ozu.

Every film against the previous

JMS: The danger is to apply a style. There is nothing worse than style. When it becomes rhetorics, it’s over. Every Renoir film tried out a little something. We have always tried to do the opposite of the preceding film. It’s a liberty that doesn’t pay off. Operai, contadini is a film against Sicilia. Oddly enough, it’s quite close to our second film, Nicht versÃ¶hnt (1965), even though it has been shot in fifty different places.

PC: I have made Vanda because I was completely fed up with the shooting of Ossos, the film I made precedently. The technical crew consisted of forty people, when only four were needed. The production went against the subject of the film. For Vanda, we were only two people: me framing the image, someone else recording the sound. I had spent a sufficient amount of time in that room, I was protected. I wanted to film this girl, with her sister, inbetween these walls, from dusk till dawn. It’s very simple, as desire of cinema, almost in a Renoir fashion, at the limits of “mise en scÃ¨ne”. To be with this girl. And then opening up to the neighboorhood, which was condamned. The irony is that it is still there. In the middle of the film the excavators have left, so they will be there for another winter. I would have liked to stay, and have the means to make a film in 35mm, for the exterior shots.

JMS: Filmmaker don’t want to deny themselves anything, they’re not masochists. If I had a subject that required digital video, I would love to make it, especially now that everyone has already declared that I’m the one who will never use video. What we deny ourselves are the esthetics which go against the precise subject.

In regards to this film, everyone is surprised that we used the zoom. We never said that it couldn’t be used! The subject decides, every film imposes its esthetical choice. Materially, the location didn’t permit us to construct a travelling shot on the edge of a ravine, with a stream behind us. And then this film, which is basically a process, a hearing, also defies the talk-shows we see on television. I am fascinated by them, although, morally and politically, they disgust me. A talk-show can be something else than a form of contempt.

JMS: Our next film will be different than Operai, contadini, although it will be shot in the same ravine. John Ford always went back to Monument Valley.

PC: Ford always said that he returned because there were people he loved a lot, and the air was pure. In Fontainhas, the air is rotten, everything is shit, but there are people I love. I am at home, there is something shared.

JMS: Our two films are each in their own way “at home”. Place is crucial. Filming Othon in 1969 did not stem from reading Corneille but from this Roman terrace where we wanted to film something. In Operai, contadini, the place contradicts the fiction: there is a proliferation of histories but one specific place that is not fictional. I can’t imagine another decor for this text by Vittorini. My film is this place, this proliferation of colors, of movements produced by nature, in this exact vicinity.

DH: No, our cinema is not a matter of courage, but of justness, of passion.

PC: Radicality is a word that freightens the public. Yet, the problems of cinema are very simple: one has to film, edit, work with actors, it’s human, almost lyrical. Seeing the films of the Straubs, I feel a sensual shiver; as a student, I didn’t understand this fear that was instilled on us even before seeing Dalla nube alla resistenza (1978). It’s a film that I keep revisiting, just like Rio Grande or a Renoir film. These are the most gentle of films.