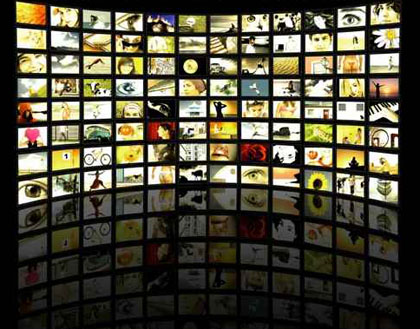 As mentioned before, one of the projects I’m working on is titled BOM-VL (which stands for “Archiving and Distribution of Multimedia in Flanders” – amazingly enough, there’s no offical website yet, but I guess that’s the way it goes with this kind of large-scale (overscaled?) projects). BOM-VL was set up earlier this year, with support by Minister Patricia Ceysens’ cabinet of Economy, Innovation and Sciences, to analyze the problems of digital preservation and distribution of audiovisual content in Flandres. It involves a wide range of cultural organisations (I’m supposed to be one of those “cultural” Bozos, whatever that might mean). From the multimedia sector the national broadcasting channel, commercial and regional channels and Videohouse and Comsof participate. The IBBT and the VRT Medialab see to the scientific support.

One of the research topics is the “use” of online audiovisual archives. What are the current social, cultural and economic paradigms surrounding the production, distribution and exchange of audiovisual content, and how can we implement these models? What can we learn from the Web 2.0 discourse, and what are the (potential) problems or shortcomings we’re facing? What does the wave of “mass amateurization” imply and how can we generate sustainability? Of course, we aren’t the first ones – nor will we be the last – who are trying to formulate some answers, or at least some propositions, to these questions. So I invited some people who have an interesting vision on these issues, which they are trying to implement in diverse ambitious European archiving projects. The workshop is free, but invitation only. If you’re interested, just send me a mail.

The traditional functioning of audiovisual archives is being completely reshaped by today’s technological advancements. The expansion of fast broadband networks and the availability of software, hardware and recording equipment have broken down the barriers to the production and distribution of audiovisual content. Large quantities of multimedia materials are flowing on the Internet and into the archives every day, and all over the world ambitious projects are set up to digitalise heritage collections. Moreover, media start to look more collective and inclusive: the ubiquitous “Web 2.0” discourse promises new levels of participatory culture in which all users are producers, sharing, appropriating and remixing content, overcoming the old regime of top-down broadcast media. Blogs, wikis, social networks and “user-generated-content” tools are presented as the new wave of voluntary alliances that users seek online. Even the traditional media are swept away into the hype: the BBC designated 2005 as the “Year of the Digital Citizen”, in 2006 Time magazine chose “You” as the as its esteemed Person of the Year.

These new socio-technological dynamics are generating many challenges, as well as opportunities for the use and exploitation of audiovisual archives, to the potential advantage of various user groups, in the cultural, educational and the broadcasting sectors, and for the general public. How do audiovisual heritage institutions and broadcasters deal with these new social and economical paradigms? How can sustainable online archives be generated, taking into account the relentless instability of digital technology and the Internet, and the stranglehold of the corporate regimes of monopoly that call themselves copyright and intellectual property? How to create meaning and value within the abundance of “free” content and build vital contexts for exploration, participation and education? What are the potentials and limitations of user-generated tagging and folksonomy systems to improve description and searchability? How to respond to changing forms of labour, knowledge and value, triggered in part by sociable web media? Which strategies can be used to address the challenge of legitimating content produced within an interactive and participatory media ecology? How can we embrace the potential of network culture and create truly open and dynamic archives where reception, interpretation and creation encounter one another?

These and other questions will be discussed during a workshop, organised in the context of the BOM-Vl project. Five international guests, who are each involved in ambitious audiovisual archiving projects, will enlighten their perspectives on the issues at hand.

Paul Gerhardt runs the independent consultancy Archives for Creativity, working with public broadcasters and archives around the world, including the BBC, Arts Council England, and the US Corporation for Public Broadcasting. Paul originated and lead the BAFTA award winning Creative Archive project for the BBC, and now co-ordinates the UK’s Creative Archive Licence Group. His career at the BBC has included the launch of the overnight Learning Zone on BBC Two, and the transformation of the major BBC/Open University partnership. From 2001 to 2004 he was Controller of BBC Learning, and responsible for the BBC’s adult education strategy and for national campaigns such as The Big Read.
www.archivesforcreativity.com

Tobias Golodnoff is the project director of Dansk Kulturarv, the cultural heritage project within DR (Danish Broadcasting Corporation), in cooperation with the Film Institute, the National Museum, the Royal Library, the State Archives and the National Art Gallery. He has been working with online media for more than ten years now, and has in DR especially been working on innovation and new media strategies. Dansk Kulturarv developped several case studies in which they tried out a few interactive models, experimenting with playlist and tagging systems. With the Bonanza project they invited the public to participate in the preservation project by voting which audiovisual material should be digitized in a first phase.
www.danskkulturarv.dk

Marius Arnesen works for the R&D division of NRK, the Norwegian Broadcasting Corporation. His work focusing generally on new media, and the Internet in particular. NRKbeta is NRK’s testing area, where Marius spends most of his days. Recently he has been working on a project in which one of their most popular shows on traditional TV in Norway has been made available to download for free via BitTorrent.
www.nrkbeta.no
www.happygolucky.no

Geert Wissink and Johan Oomen are both working as researchers for the Dutch Images for the Future project, run by the Filmmuseum (FM), the Dutch Institute for Sound and Vision (Sound and Vision), Centrale Discotheek Rotterdam (CDR), the National Archive (NA), the Association of Public Libraries (VOB) and the Netherlands Knowledgeland Foundation (KL). Geert Wissink is also working for Knowledgeland (KL), an independent Dutch thinktank based in Amsterdam, who are aiming to establish the Netherlands as one of the key regions in the international knowledge economy. Johan Oomen is project-manager of R&D projects at The Netherlands Institute for Sound and Vision. He is mainly working on externally funded R&D projects, such as FP6 projects VIDI-Video, P2P-FUSION, MultiMATCH and eContentplus project Video Active. He is also a member of the “Webstroom”, the working group funded by the Dutch SURF Organisation on the use of streaming media in higher education,
www.imagesforthefuture.org