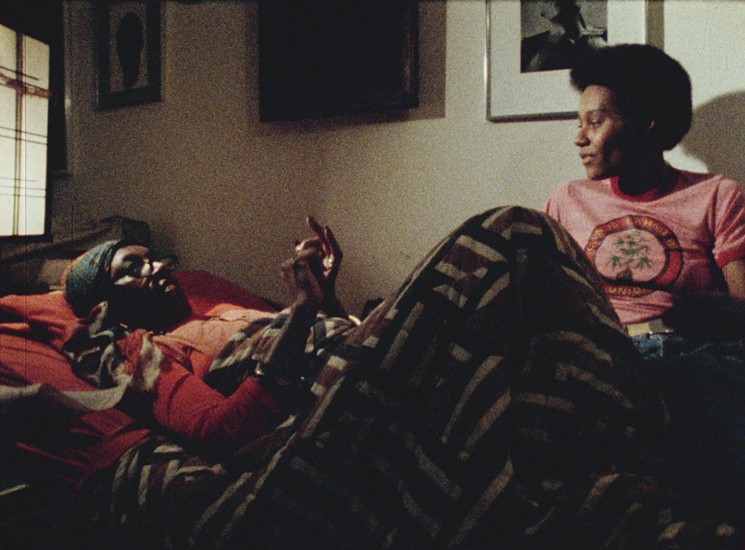 Screening of Born in Flames (1983, 85′, NEW 35MM PRESERVATION PRINT), followed by a conversation with Lizzie Borden. As part of a retrospective dedicated to the work of Lizzie Borden, which also includes a carte blanche program (03 > 28 February).

“I made the film because it seemed that people now were either completely cynical about the effectiveness of any kind of political process, or burned out and caught without any kind of language. It seemed important to re-ask certain questions, and to re-ask them as mediated through Europe, where the left is still a very vital force. If it relates to the sixties, it’s only because that energy of the sixties was so good – not just here but in Europe too. Where has that all gone?”

Bearing in mind the recent attempts of filmmakers such as Martin Scorsese and Baz Luhrmann to revitalize the spirit of 1970-80’s New York, the heydays of no wave, post-punk and “the get down” seem to making a swift comeback. Sure, the imagery of The Big Apple as modern slough of despond and vibrant beacon of creativity might have some appeal as backdrop for glistening nostalgia trips and epic rock operas, but its highly doubtful that the large-scale and hyped-up entertainment drama’s invading our screens these days can measure up to the untethered vitality and relentless waywardness of Lizzie Borden’s Born in Flames (1983). The recent restoration of this in Downtown NY and guerilla-style produced science-fiction fable manifests a radical vision that detonates like a molotov cocktail amidst an actuality that is marked by political unrest and reactionary tendencies. Perhaps as never before, the speculative vision of a post-revolutionary world order which, despite rhetorical promises of change and equality, indulges in systematic discrimination and oppression evokes multiple echo’s of recognition. No wonder that the film serves as a blueprint for many activist movements in the US: its zealous and kaleidoscopic portrayal of dissident struggle against heteropatriarchy and racism appears to have only gained in urgency and pertinence. Swinging between various perspectives and characters, with the likes of Kathryn Bigelow, Adele Bertei and Florynce Kennedy playing a version of themselves, and driven by the grooves and hooks of The Red Krayola en The Bloods, this challenging reflection on gender, sex, race and class confronts us like no other with the limitations and possibilities of resistance today.

Born in Flames is the focal point of an extensive film program that was composed in consultation with Lizzie Borden. Among the works in the program are two other rarely screened films of Borden: her debut film Regrouping (1976), a portrait of a woman’s group whose homogeneity of race and class Borden would later counter, and Working Girls (1986), a demystification of sex work that was initiated during the production of Born in Flames. Furthermore this program offers work by friends and compagnons-de-route like Vivienne Dick and Sheila McLaughlin, as well as a series of films that have served as source of inspiration or that evoke contemporary resonances. The full program can be found here.

An initiative of Cinematek & Courtisane, in collaboration with the Embassy of USA, ERG, Macba & Tabakalera.