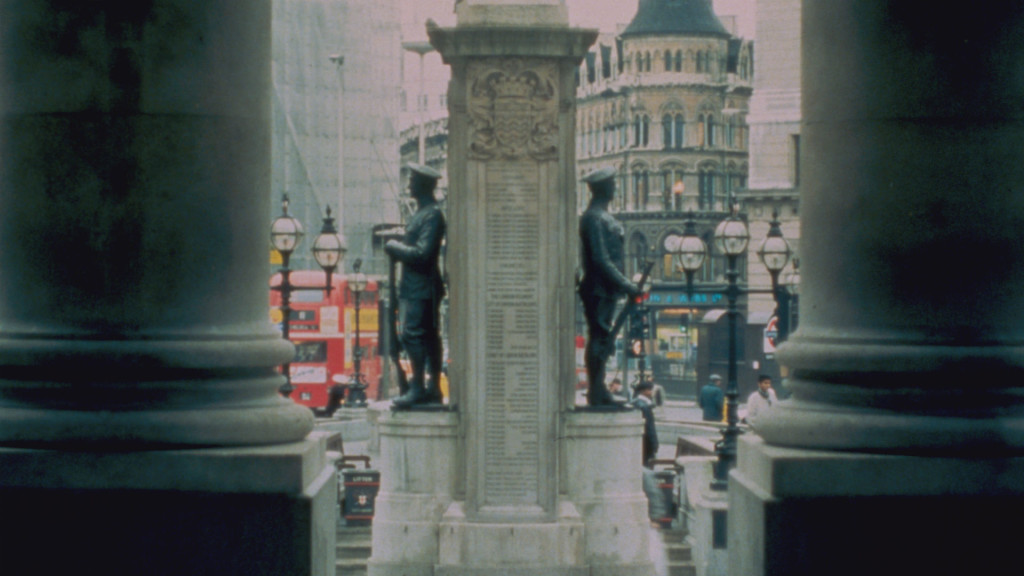 A conversation with Patrick Keiller, preceded by a screening of London (1994, 85′).

“I had embarked on landscape film-making in 1981, early in the Thatcher era, after encountering a surrealist tradition in the UK and elsewhere, so that cinematography involved the pursuit of a transformation, radical or otherwise, of everyday reality. I recently came across a description, in Kitty Hauser’s Bloody Old Britain, of O G S Crawford’s photography: ‘Like photographers of the New Objectivity, clarity was his goal. Like them, he favoured stark contrasts, with no blurring or mistiness. His focus, like theirs, was on the object or the scene in front of him, which it was his aim to illuminate as clearly as he could… It was commitment that lit up his photographs… Such photographs suggest a love of the world that was almost mystical in its intensity.’ I had forgotten that landscape photography is often motivated by utopian or ideological imperatives, both as a critique of the world, and to demonstrate the possibility of creating a better one.”

What is the “problem of England”? In the aftermath of the Brexit and the ensuing rise of English nationalism this question might be lingering in the minds of many, but already two decades ago it was raised by a fictional character named Robinson in what became a trilogy of films examining the economic and cultural doldrums of neoliberal England. This rather unreliable character who is never seen but only heard of by way of an unnamed and equally unseen narrator acts as a modern-day flâneur in the tradition of Baudelaire, Breton and Benjamin, dwelling on the hidden stories and forgotten histories of his everyday surroundings, in pursuit of a “problem” whose signs he hopes to find reflected in the landscapes and cityscapes of “dirty old Blighty”. The first film in the trilogy, London (1994), tracks the wanderings of the eponymous character and his narrating companion through Britain’s capital at a time when the city was marked by a series of IRA bombings and the Tory party was surprisingly re-elected for the fourth consecutive time. Drifting from Soho, where the likes of Montaigne and Mallarmé lived in exile, to Vauxhall, where the ghosts of Holmes and Watson still roam, from the Stockwell flat where Apollinaire stayed to the Savoy suite which gave Monet his view of the Thames, the film follows the pair as they engage in exercises of psychic landscaping and free association, in an attempt to wrestle themselves free from the constraining patterns of a city which is, as Robinson claims, “under siege from a suburban government which uses homeless, pollution, crime, and the most expensive and run down public transport system of any city in Europe as weapons against Londoners’ lingering desire for the freedoms of city life”. If London has failed, Robinson suggests, it might not only be because of the city’s civic void and invisible social life: perhaps its failure is deeply rooted in a typical English fear, a fear of “Popery and socialism” and of “Europe, that had disenfranchised Londoners and undermined their society.”

Three years later, just before the general election that brought New Labour to power, Robinson in Space (1997) shifted the field of inquiry from England’s capital, one of the metropolitan centers of global financial capitalism, to its ex-urban landscapes of globalized production and consumption. Inspired by Daniel Defoe’s A tour thro’ the whole island of Great Britain, Robinson and his companion embark on seven voyages, beginning with a trip downriver from Reading to the Thames estuary at Sheerness, before striking out on journeys to other major ports, including Bristol, Liverpool, Portsmouth and Hull. In contrast to the familiar critique which considers the UK’s economic decline as the result of its old fashioned “gentlemanly capitalism,” what the duo’s expeditions reveal is the advent of a newly constructed landscape of manufacturing plants, business parks, retail sheds and shopping malls, bristling in the hinterlands of cities that are said to have failed to flourish as post-Fordist enclaves for finance, leisure and service economy. In the third travelogue, Robinson in Ruins (2010) the mythology of Anglo-Saxon capitalism is explored further by focusing on issues of mobility, belonging and displacement, and their relationship with landscape in a context of economic and environmental crisis. The “ruins” Robinson finds himself dwelling through turn out to be the wreckage of a neoliberal culture that fails to accept its own demise. But despite this looming deterioration the flâneur leaves us with sparkles of hope, finding “imperceptible tremors of an inconceivable future” amidst depopulated landscapes where “non-human intelligences” silently and stubbornly refuse to bend to the brutality of capitalism.

What can be seen, then, in the work of Patrick Keiller is an exploration of the potential of “architectural cinematography” to not only develop a critique of the configuration of space, but furthermore to imaginatively transform it. In this way he places himself in a long lineage of artists and thinkers who have expanded on the surrealists’ notion that spaces can be changed by displacing the way we look at them. Perhaps Robinson, the peripatetic scholar, merely acts as a stand-in for the more delirious side of the architect-turned-filmmaker’s own expeditions through the spatial arrangement of neoliberal England, in a diligent quest to trace the ever-changing contours of a “problem” that is seemingly not going to go away any time soon.

In collaboration with STUK, Lieven Gevaert Centre and the Institute of Philosophy (KUL), Bozar Cinema + Architecture and LUCA Brussels. On 2 March 20:00 Patrick Keiller will also be present at Palais des Beaux Arts in Brussels to present and discuss The End (1986, 18’) and Robinson in Space (1997, 82’).