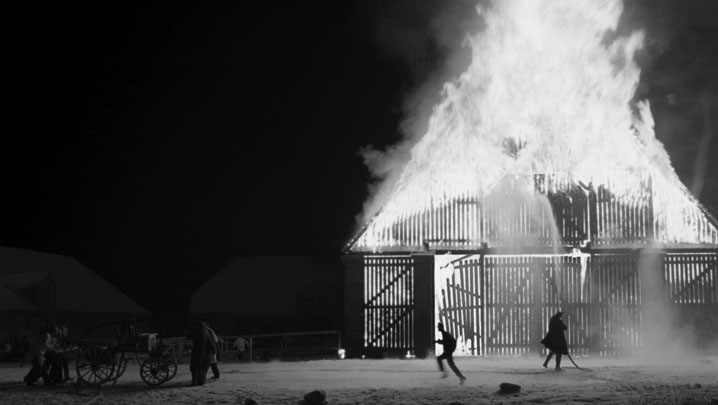 Yesterday I saw Michael Hanneke’s extraordinary Das Weisse Band (“the White Ribbon”). One of the things that makes the film stand out is its visual style: it was shot on color film, with a minimum of lighting, and then, in post-production, digitally retouched and translated to black-and-white. The night scenes in particular are lavishing, and sharper than anything I’ve seen before. Here’s an excerpt from an interview that was published in Sight & Sound (December 2009 issue), in which he talks about how the style of the film came about, the influence of German photographer August Sander and the impact of digital technology.

“It was Sander, really; most of the photos of that era are not very sharp, but his are often extraordinary in that respect. But he shot all his photos by daylight, whereas we had to shoot some scenes at night, and that’s difficult if you have people moving around and using petrol lamps or torches. If you look at those kinds of night scenes in films, even the best look completely theatrical. Even Dreyer – look at Ordet again. Very beautiful, but not at all realistic.
But I wanted lighting that looked wholly credible, and that’s very difficult to achieve. We had to shoot in colour because today’s black-and-white film isn’t sufficiently sensitive to low light, and even then, though there were no faults – the cameraman shot it impeccably – we spend two weeks working on it digitally. Even five years ago we wouldn’t have been able to get what we wanted. Look even at fairly recent Hollywood films with night scenes lit that way – a really beautiful film like Unforgiven – and you see the colours, especially red, bleeding. Thanks heaven for digital; I had to do the same on Time of the Wolf, which was in colour. Black and white shows up those problems far more than colour, so this new film involves lots of work. But it’s worth it.”